Nectar, fruits, and blood. A genomic view on the feeding habits of bats.

Bats are mammals like no other – airborne, mostly nocturnal, often hidden away in caves, capable of using echolocation for in-flight navigation. No two bat species are alike, however. Their diversity of morphology, life styles and feeding habits is staggering. New bat genomics research published today in GigaScience explores  the footprints of evolution, to explain how New World Bats adapted to different food sources. 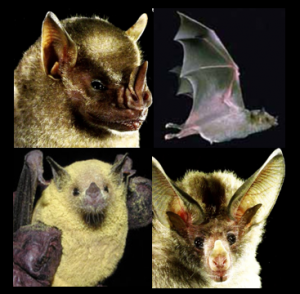 Bats evoke dark fantasies revolving around vampires, death and disease. These days, actually fact-based concerns about bats as potential sources of dangerous coronaviruses add to their shady reputation. However, far from any movie-inspired popular imaginations of stereotypical blood sucking vampires, the nearly 1,300 species of bats are adapted to vastly different habitats and food sources (see this previous GigaScience article on the cave nectar bat Eonycteris spelaea, and our previous GigaBlog posting on bat genomics back in 2013). Some bats feed on fruits, others sip nectar, some hunt insects, and others are indeed carnivorous – unique and fascinating adaptations to sometimes very specialized types of food. How did this diversity evolve?

To get answers, a team of Mexican scientists, coauthors of this new GigaScience article, looked more closely at one particular group, the New World Leaf-nosed Bats (Phyllostomids), and explored genomic adaptations that could explain the evolution of different feeding habits.

The New World Leaf-nosed Bats are a diverse group, with 216 species in 60 genera in North and South America. One genus within this group is Leptonycteris (the “longed nosed” or agave bats). Leptonycteris bats survive on a diet of nectar and pollen, and, as the authors explain in an email for GigaBlog, ”they are the most important pollinators of the agave plants, including the species used for making popular alcoholic drinks from Mexico, such as tequila and mezcal.” Another Mexican bat, Musonycteris harrisoni (the” Banana bat”) has one of the longest faces of all bats and ”seems to be a bat that wants to be a hummingbird”, considering its nectar-feeding skills.

And yes, vampires do indeed exist in the bat world. Desmodus rotundus has teeth that are especially adapted to cut into the skin of mammals, together with other adaptations that allow for the digestion of blood.

Each of these specialized feeding habits comes with adaptations in morphology, behavior and  physiology. Can we see how evolution acted on the bats’ genomes to enable the utilization of different food types? That’s the question that Luis Eguiarte and colleagues examine in their new GigaScience paper. The authors explain:

“ The evolutionary changes involved in a diet modification by a group of animals is considered one of the most important events in animal evolution, given that diet changes open new ecological and physiological opportunities. In order to take advantage of these new opportunities, animals evolve new morphologies (such as changes in the head shape, in the dentition or beak, shape of the wings or limbs, etc.), physiologies and behaviors.”

“Some extreme feeding strategies, in particular those that only or mainly feed on liquids, such as nectar or blood, involve important physiological challenges. We decided to take advantage of this huge diversity of diets in the New World leaf-nosed bats to explore the evolutionary changes in their genomes”.

To obtain a reference for comparative genome analysis, the Mexican researchers sequenced and assembled the genome of an adult male Lesser Long-nosed Bat (Leptonycteris yerbabuenae) at high quality. They then got sequence data for four more bat species with different feeding habits: Macrotus waterhousii (an insect feeder ), Artibeus jamaicensis (a fruit-feeder), and two nectar-pollen feeders, Macrotus harrisoni and Leptonycteris  nivalis.

Getting the bat out of the cave

However, before any of the genomic work could be done, specimen had to be collected, which required some field work in pitch-dark Mexican caves. The authors recall the extraordinary outdoor part of the study:

“Both Mexican Leptonycteris species are pretty common. The individual that we analyzed in more detail, an adult male L. yerbabuenae, came from the El Salitre cave, in the state of Morelos, south of Mexico City. Even if the species is common, the first two hours inside the cave were frustrating, as we only found other bat species. For Yocelyn, the first author of the paper, it was her first time in a cave, and she started to comment on Murphy’s law (“If there’s any way to do it wrong, we will find it”). However, to be in the cave was an extraordinary experience, as it made no difference opening or closing her eyes, and also smelling the tremendous odor of a tropical cave while listening to the bats’ wings fluttering all around. Fortunately, approximately one hour later, we found our Leptonycteris!”

Other samples were donations from researchers of the Zoology Museum “Alfonso L. Herrera”, at the School of Sciences of UNAM university. With bat samples secured and genomic raw data obtained, the bioinformatic and phylogenomic work could begin – a new experience for Eguiarte’s lab, which previously mainly did more traditional population genetic work:

“This was our pioneering work in mammal genomics, so the adventure started from getting adequate samples and good, large quantities of very pure, not degraded and useful DNA for massive sequencing, to learn how to handle the huge data bases that at first we were not able to manage. At the end, we learned all this and right now we are even enjoying the bioinformatic analyses!“

Uncovering the footprints of bat evolution

Using their newly generated sequenced bat genomics data, the scientists undertook a phylogenomic analysis, based on 22,388 gene families, and looked for footprints of past selection events. Also on the level of gene families they detected expansions and contractions of genes that have functions related to different types of diet.

Vampires for example show genomic adaptations that are associated with feeding on blood, such as coagulation mechanisms. In the genomes of nectar feeders, on the other hand, genes that have to do with metabolizing sugary liquids showed up prominently. 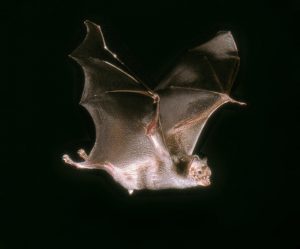 Feeding mainly on nectar comes with another huge challenge: This particular diet is awfully sweet– way too much sugar for a usual mammalian metabolism. How do the specialized bats cope? The genomic results provide a clue: The species that feed on nectar (M. harrisoni, L. nivalis, and L. yerbabuenae) show signatures of positive selection for genes involved in insulin secretion, calcium and iron storage. Luis Eguiarte explains:

“The nectar feeding bats share a group of positively selected genes that help them to avoid the adverse effects of high blood sugar levels. These genes are of potential relevance to humans and may help in future studies involving nutrient mal-absorption and metabolism disorders including diabetes, hyper- glycemia, and obesity in our populations. Some of the selected genes in nectar feeding bats were directly involved in sugar metabolism, that accounts for almost all their diet (as nectar is basically sugar and water), as well as lipids metabolism genes, as these bats have to make lipids from the energy obtained from sugars. We also found selective signals in iron metabolism genes, an element that is seldom present in nectar and pollen and thus became a very precious nutrient to nectar feeding bats.”

There’s also a bigger ecological picture that Eguiarte’s lab is interested in: Bats from the genus Leptonycteris pollinate agaves and related plants. The coevolution between agaves and bats is the topic of another recent paper from their lab ( Flores-Abreu et al.) and the insight from comparative genomics will be helpful to better understand “the fascinating love story between pollinator and plant”, as Eguiarte calls it.

“This new study in GigaScience is our first contribution to the evolutionary genomics of Mexican animals and we hope in the future to have other relevant and original contributions, in particular including other nectar feeding animals”.

At GigaScience, we recently got bat genomics expertise on board. We are pleased to announce that Emma Teeling (University College Dublin) has joined our Editorial Board.  As one of the Founding Directors of the Bat1K project, aiming to produce high quality genomes of all living bat species to uncover the genes and genetic mechanisms behind their unusual adaptations, stay turned for many more exciting insights on bat genomics to be revealed. If you wish to learn more about the importance of bat genomics, don’t miss her TED talk: