DNA Day in the Jungle. Aaron Pomerantz on #JungleOmics

I’m a genomicist, get me into here.
Today is DNA Day, commemorating the day in 1953 when Watson, Crick, Wilkins, Franklin et al. published their Nature papers on the structure of DNA, as well as the day in 2003 that the completion of the Human Genome Project was declared. Or at least when the project conceded “the remaining tiny gaps [we]re considered too costly to fill”. This 65th and 15th anniversary of the DNA structure and human genomes is a good point to look back at how far molecular biology and genomics has advanced in that time. From an enormous Manhattan-like project (co-incidentally also involving Los Alamos) genomics has evolved and democratised to such an extent that it can now be carried out anywhere via hand-held Oxford Nanopore MinION sequencers. We’ve charted the rise and development of these nanopore sequencers in many papers (including the first whole bacterial genome assembly in 2014), and a new paper just out this month takes DNA sequencing and genomics to a completely new place: the jungle.

Welcome to my laboratory 🙂

Following in the footsteps of our many author Q&A’s we thought we would interview first author Aaron Pomerantz on his work, where genomics has taken him, and his view of where the field of genomics is on DNA Day 2018.

Tell us a bit about yourself and how you got into this area of research? 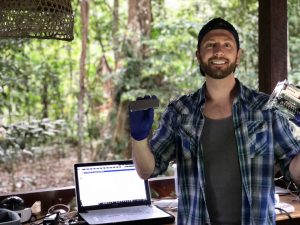 Aaron Pomeratz in his natural environment – sequencing DNA in the jungle.

I was always fascinated with biodiversity and the natural world growing up, but never envisioned I’d be a scientist using portable technology in a rainforest one day. During my B.S. degree I studied entomology and followed up with a M.S. degree focusing on molecular biology techniques. It was right after my M.S. that I visited a colleague on a research trip to Peru and happened to be offered a position as a field biologist at the Tambopata Research Center, in the heart of the Amazon rainforest. During this time, I became interested in applying portable scientific instruments to fieldwork, and the timing was right with newly developed tools, such as the Foldscope (an origami-based microscope) and the Oxford Nanopore Technologies MinION (a portable DNA sequencer). I was fortunate to receive grant funding from the National Geographic Society to apply this new idea and tools to biodiversity research in the tropics and have worked to advance this developing area of research now as a PhD candidate at UC Berkeley.

Today is DNA Day, and as it’s the 15th anniversary of the completion of the human genome project, where $3billion USD and took a decade to sequence a single reference genome. Predominantly carried out in cavernous sequencing centers in a few wealthy countries. How does this contrast with your current work?

I think anyone who spends time around genome sequencing projects hears the adage of how far we’ve come in recent years with advancements in sequencing technologies and how much it has dropped in price since the “early days” of the first human genome. But it’s still incredible to take a step back and think about how this rapid change with sequencing genetic material is impacting scientific research today. I’m enthusiastic about the sequencers themselves dropping in price and becoming portable, because this allows for greater access to communities beyond extensive sequencing facilities in wealthy countries, especially in the context of biodiversity, environmental, and epidemiology research. Thus far I have primarily worked in Peru and Ecuador, where it is difficult to find access to any kind of sequencing platform within the country, and this lack of equipment can significantly delay or hinder research efforts when samples must be shipped internationally. For my own work, it’s hard to express how exciting it has been to collaborate with local researchers and test out our ability to rapidly identify plant, animal, and fungal species without ever leaving the rainforest. I think in the near future, obtaining genetic information from an organism will be as simple of a task as taking a photo on our cell phone is today. 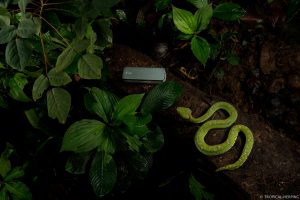 Snakes not on a plane. Courtesy of A Pomerantz.

What interests me about “3rd generation” nanopore sequencing is that it is so fundamentally different from the previous platforms, especially with the ability to sequence long stretches of native DNA or RNA molecules in real-time. The utility of the MinION nanopore platform is that it’s small (making my cell phone look bulky in comparison) and can simply run off the power of my laptop. The read data starts to generate immediately, so while attempting to identify species through DNA sequencing, I can take some raw reads, search against a database, and start to get a sense of what it is within minutes while in the field. In a nutshell, I think nanopore sequencing is so compelling for projects like my own because of the ability to sequence anything, anywhere, anytime.

The human genome project was an international effort involving the US, UK, Japan, France, Germany, Spain and China (which involved our co-publishers BGI). In that case the reference DNA was shipped across the world between giant sequencing labs, so what advantages does bringing the sequencers to the DNA rather than the other way now bring? 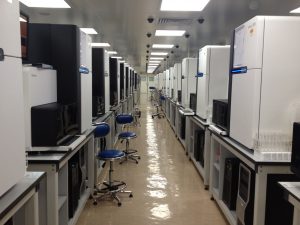 The view from BGI Hong Kong

Portable sequencing still entails some challenges, and there are certain contexts when it is useful to be in a more controlled laboratory setting with your sample. However, I think bringing the lab to the sample, rather than shipping the sample to a lab, can be a fundamental shift in how we think about many aspects of fieldwork and international projects. Rapid disease diagnostics, biodiversity assessments, wildlife/timber trafficking, and water/food quality are some of the areas where I think it can be far more advantageous to bring the sequencer to the field rather than ship material abroad.

We’ve previously covered how second generation sequencing technology is shaking up wildlife forensics by massively increasing the throughput and decreasing the cost. How do you think 3rd generation nanopore technology can take conservation and wildlife protection further?

In our paper, I thought it was appropriate to conclude by saying,

“While we live in a period of amazing technological change, biodiversity and ecosystem health are decreasing worldwide. Portable sequencing will not be a silver bullet for conservation biology but it can be a powerful tool to more efficiently obtain information about the diversity of life on our planet.”

Current sequencing technologies have significantly increased in throughput and decreased in cost per sample, which is important for making conservation projects more robust and cost-effective. But these current sequencing platforms themselves are still prohibitively expensive and primarily relegated to facilities in wealthy countries, whereas the most biodiverse and threatened regions on the planet are typically in less developed parts of the world. Therefore, I think the advantage of portable nanopore technology is that it can bridge this gap by bringing the lab into the field, serving as a tool to quickly obtain genetic information that can be used to identify species/populations, establish geographic distributions, aid with in situ conservation actions, ex situ breeding programs, and promote conservation law efforts. The next steps will be finding ways to make portable sequencing more cost-effective by processing numerous samples per run, developing easy to use tools for upstream processing of DNA/RNA in the field, and efficient downstream bioinformatics analyses, which are areas myself and collaborators are actively working on now.

We’ve come an incredibly long way in the last 15 years, so where do you think this technology and field will be in another 15 years?

If you told me just a few years ago that people would be sequencing DNA in jungles, the arctic, and space, I probably wouldn’t believe you. It’s hard to imagine where sequencing technology will be 15 years from now, but myself and others have envisioned a sort of ‘handheld DNA scanner’ that someone can fit in their pocket and sequence genomes in minutes. With the advent of nanopore sequencing, I think this technology can get us to that easy sample-to-DNA device to answer your biological question, whether it’s sequencing a person to find out what’s making them sick, identifying a new species, or winning a bet in the sushi restaurant if that tuna really is tuna. As a PhD candidate right now, I’m very excited to be in the biological sciences. Working alongside others using new technology to address big challenges and understand the natural world is what drives me and what makes me optimistic about more advances to come in the next 15 years!