Getting the Buzz on Bee Parasites. Author Q&A with Tatsuhiko Kadowaki

The decline of global honeybee populations are a major environment concern, because of their vital role in our food systems and pollination of flowering plants. Twenty first century ‘Omics is coming to the rescue, and published in GigaScience this week is an article that presents the genome and proteome of a mahor threat to bee colonies, the parasitic mite, Tropilaelaps mercedesae. The research was carried out by an international team of researchers at Jiaotong-Liverpool University and Liverpool University. Here we include a Q&A with Tatsuhiko Kadowaki and the authors of the paper on the implications of this research. 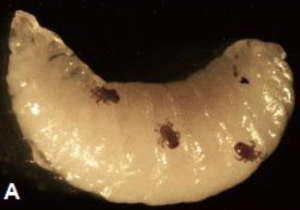 Given the ongoing international devastation of bee colonies, the researchers sequenced the genome of T. mercedesae, to assess the interaction between the parasite and host as well as provide a resource for the ongoing battle to save honey bee populations.

Mite is right?
Swiftian ideas of little fleas having lesser fleas are very relevant to understanding and tackling these parasites. The researchers investigated the bacteria that infect the bee mite, as little is known about them. The scientists discovered that the symbiote R. grylli-like bacteria is commonly present in T. mercedesae. They further found that this bacteria was involved in horizontal gene transfer of Wolbachia genes into the mite genome. Wolbachia is a bacteria that commonly infects arthropods, but is not present in T. mercedesae. While the authors were not overly surprised at discovering the occurrence of horizontal gene transfer has been detected in about 33% of sequenced arthropod genomes, this has to date note been reported in any Arachnid species.

The extent of honey bee colony destruction remains a complex problem, but one that has an extensive impact crop productivity since honey bees are needed for pollination of a variety of plants. Indeed, in several places in China, farm workers have begun to carry out manual pollination to maintain high crop yield in orchards. Thus, research and resources to help combat this global threat are needed now. The findings, genome, transcriptome, and proteome resources from T. mercedesae study add another weapon in the fight to save bee colonies.

In keeping with the journal’s goals of making the data underlying the analyses used in published research fully and freely available, all data from this project are available in GigaDB. The sequence and proteomics data are also available in NCBI (PRJNA343868) and PRIDE (PXD004997). 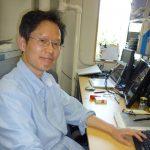 Following in our series of author Q&A’s we asked Tatsuhiko Kadowaki and the authors of the paper some questions about this work.

How can this research help prevent the decline of honey bee populations?

Tropilaelaps mercedesae and Varroa destructor are two devastating ectoparasitic mites responsible for the global honey bee colony losses. Although T. mercedesae is currently restricted in Asia, they may spread and establish in Europe and North America due to the global trade of honey bees in future. Thus, developing novel and effective methods to control the honey bee parasitic mites is a major issue in the current apiculture industry. The results of our research project provide resources for 1) developing the gene-based control strategies, 2) determining the weak points for conventional (chemical) controls, and 3) identifying the targets for biological control.

What does having a reference genome for Tropilaelaps mercedesae allow us to do that we hadn’t been able to do before?

Genome and transcriptome sequences of T. mercedesae reveal that the mite does not appear to rely on conventional chemosensation for the behaviors. The control methods targeted to gustatory, olfactory, and ionotropic receptors are not effective and we need to consider using other targets if disrupting the chemical communication. We found that T, mercedesae is enriched with detoxifying enzymes and pumps for the toxic xenobiotics and thus the mite quickly acquires miticide resistant. For developing the chemical control methods, we need to search for compounds which may not be recognized by above proteins. Manipulating symbiotic Rickettsiella grylli-like bacteria closely associated with T, mercedesae may also help us to develop the novel control strategies. Moreover, a few genomes have been sequenced among Acari (mites and ticks) to date, and the addition of T. mercedesae genome will be useful to better understand the biology of mites and ticks which represent the major pests of plants and vertebrates as well.

Is the horizontal gene transfer from bacteria a surprising finding, and what does it mean?

We are not very surprised with this finding, because horizontal gene transfer from Wolbachia endosymbionts has been detected in ~33% of the sequenced arthropod genomes. However, this is the first example discovered in mites and ticks as far as we know. Our finding suggests that Wolbachia was once a symbiont for T. mercedesae or its ancestor but it would have been replaced with R. grylli-like bacteria during evolution.