Giardia, a protozoan parasite which people typically pick up through drinking infected water or contaminated food, can cause diarrhoea and stomach pains. New research published today in GigaScience, with supporting data in GigaDB, provides insights into the mechanisms that cause the symptoms of giardiasis.

Currently more than 200,000 people are ill with giardiasis and there are 500,000 new cases a year. Kevin Tyler (pictured) and his team at the UEA’s Norwich Medical School, together with colleagues from Liverpool, used state-of-the-art proteomics to study how the Giardia parasite can cause severe symptoms in some patients (see also their press release).

In one of our “Author Q&A’s“, Kevin Tyler explains why the results matter for understanding Giardiasis:

Giardia is a protozoan – what is special about working with protozoan parasites? 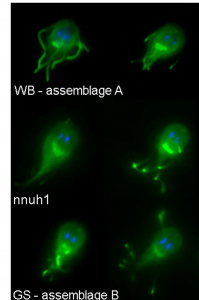 “When we talk about infectious diseases in the developed world, there is a focus on viral and bacterial infections. Parasites are sometimes left out of the conversation because in the world’s wealthier countries they cause few hospital admissions. World-wide however, protozoan parasites cause the highest burden of disease. They include malarias, cryptosporidia, giardia, amoebas, leishmanias, sleeping sickness and chagas disease trypanosomes, trichomonas and the most prevalent of all infections, toxoplasma. These are predominantly diseases of poverty and largely neglected, receiving far less research funding than diseases affecting wealthier communities.

As a group, protozoan diseases are scientifically fascinating. They are eukaryotes like we are. This means that most antibiotics that we use against bacteria have little effect against protozoan parasites (with the exception of metronidazole, which is the drug of choice for giardia and trichomonas). Protozoa are single celled microbes, they are only seen under the microscope. In fact giardia was one of the first disease causing microbes to be seen. Anton van Leeuwenhoek himself identified it from his own stool with one of his early microscopes.

In evolutionary terms they are very divergent from our cells, with interesting features: characteristic teardrop shape, two nuclei, adhesive sucker, eight flagella, lack of a mitochondrion and the ability to form thick walled, environmentally resistant cysts.  Features which are common between our cells and protozoan cells say something about what it takes to be a eukaryote. The differences on the other hand are potential targets for new drug therapies, which are desperately needed.

For these reasons, from my perspective, by working in a fascinating area of biology and medicine it has been possible to contribute disproportionately towards advancements in human health, which is hugely rewarding.”

Giardia infections can lead to damage in the duodenum (a section of the small intestine), causing severe diarrhea. What is known so far about the mechanism that is causing these symptoms?

“I think it is fair to say: surprisingly little, considering how long we have been studying Giardia. However, recently the community of scientists involved have begun to make substantial progress. A big question has been: “Why don’t most infected people get sick, but some who do are so profoundly ill?” As you mention, giardia is well known to colonize the duodenum and can attach directly to the villi which are present there via its ventral sucker. Using cysteine proteases, it is able to damage the apical junctions and this can lead to apoptosis of local cells and to villous atrophy. However, this is only observable in a small minority of patients and such localized damage cannot sufficiently explain the disseminated symptoms. In the past few years it has become clear that the host, inflammation and the immune system have important roles and so do the bacteria in the gut, the microbiota – and this is a disease for which probiotic therapy has been shown to have positive effects.”

“Our approach was to identify and quantify all the proteins in the trophozoites [activated, feeding stages] that current detection technology permits and to compare the abundance of these with what we found in the media in which we grew them, to look for enrichment in the media as a signature of actual secretion. The proteomics was performed by Dong Xia and Jonathan Wastling at Liverpool University and we were able to make use of a brand new (at that time) and highly sensitive QeXactive MS and validate it with the results on the same samples with the more established Orbitrap MS. The results were very comparable and we were pleased to publish both sets with you.”

What did you expect to find? Any surprises?

“A surprise was that it appears very few proteins are actually secreted and those that are were dominated by two families – the Cathepsin Bs, which we anticipated, and the Giardia tenascins, which were a surprise. Other than these families it was clear that an extracellular nuclease was being secreted and some de-oxygenating enzymes.”

What are tenascins, and why are they important?
“Tenascins are a group of extracellular matrix proteins which (negatively) modulate adhesion between cells in tissues. They do this via ligation of EGF receptors, they have multiple canonical EGF receptor binding domains. They allow tissues to remain in dynamic equilibrium and they can be important in cancer during metastasis. Simply put, their upregulation can allow cells to detach from a primary tumour. Giardia have independently evolved a large family of proteins that are structural and functional mimics of tenascins and also possess multiple EGF receptor binding domains.”

You explored the physiological function of Giardia virulence factors in ‘petri dish’ experiments, using electrophysiology assays. Very briefly, what was the experimental setup and what did you find?

“We wanted to show that these secretions had a role independent of the parasite and so would be able to act on distal sites such as the colon, even if the parasite itself was not present. We devised an assay to test whether the secreted proteins alone would affect intestinal epithelium cellular functions – such as chloride/water transport which could lead to diarrhea. We used what are known as Ussing Chamber assays (evaluating short circuit current and resistance) to demonstrate directly that the secreted proteins have the effect of dysregulating chloride ion flow, preventing the cells from being able to effectively extract water from the lumen of the gut, while not being immediately toxic to the membranes.”

What is, in your opinion, the most important new insight gained from this research?

“The prospect of a mechanism of microbial pathogenesis, where secreted factors not only directly damage the host but actually inhibit host tissue healing, is novel and exciting.  This mechanism may well be more widespread than just in Giardia. The molecular detail of the mechanism will be fascinating to enumerate and the therapeutic potential from agonizing and antagonizing the action of these proteins will be of critical importance, going forward.”

To make their work even more reproducible the authors have made their experimental protocols available via protocols.io:

“This Parasite Uses Your Own Gut Bacteria Against You”,  LiveScience.com