Under Construction: Plant and Animal Genomes Get a Refurb 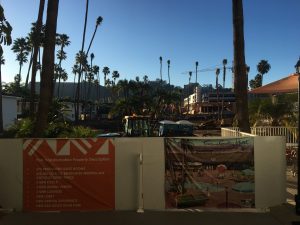 As publishers of a lot of plant and animal genomes, the biggest conference for this research community is the appropriately named Plant and Animal Genome Conference (PAG). We’ve attended a number of these giant meetings in their San Diego base, and in recent years they have been branching out to host satellites in Asia (PAG Asia, which last year included a workshop that we participated in). And we attended the 28th edition of the meeting this year, which was held as ever in mid-January.

This year seemed a year in transition – both physically and metaphorically – with the conference hotel for many years (the Town & Country) being smack in the middle of a much delayed refurbishment. And the field and talks on show changing rapidly in terms of what are the norms in genomic research; with increasingly ubiquity, scale and quality of the outputs on show. This has mostly been driven by the incredibly rapid advances in technology (such as we’ve discussed before long running trends like the move from short to long reads), but to catch up with the rapid application of these outputs in conservation work, genomics-assisted breeding, and genome editing, there has been a need to scale up education, both to produce a new generation of genomic scientists, but also the public to understand and make informed decisions about these new technologies and how they will affect their lives (see our Bauhinia Genome project as an attempt to do this). As an area of interest for us it was great to see so many education and outreach tracks and talks in the meeting. Including Sarah Evanega from the Cornell Alliance for Science keynote on “Embracing Effective Science Advocacy”.

This year there were 2,951 attendees representing 62 countries, and when including exhibitors the total attendance was over 3,500. The huge numbers meaning things were spread over 186 scientific workshops. The building work not helping things getting around in the venue – with no fountain in the fountain court, and a separate off-site location for some additional tracks. While the venue may have been dusty the keynote speakers were fresh. Covering and outstanding breadth of topics expected for such a broad conference. It was great to catch up with lots of old friends, Editorial Board Members, and meeting many of our wonderful authors and reviewers in person.

While the official opening reception wasn’t until the Sunday evening, the conference really kicked off with 2 days of pre-meeting workshops organised by special interest groups. With the Functional Annotations of Animal Genomes (FAANG) organising a full afternoon of talks on the Friday to bring everyone involved up to speed with the current situation in the many global projects under the FAANG umbrella. Followed on the Saturday by a series of parallel workshops on a wide variety of topics.

In the Development and Application of Genome Engineering and Transgenic Technology for Agriculture session, we were regaled with a tale spanning two decades by Dr James Dale (Centre for Tropical Crops and Biocommodities) describing how they are helping prevent vitamin A deficiency in Uganda by the generation of a transgenic cooking banana high in vitamin A, which is aimed to be commercially released in 2022 assuming it passes all regulatory reviews.  According to Markita Landry (University of California Berkeley), the process of delivering genetic materials into mature plants can now be performed using carbon nanotubes, which is faster and cheaper than producing full transgenic strains of crops. As agriculture is such a big part of the meeting these topics were also covered in some of the keynotes, Jack Bobo talking about synthetic biology in food, giving a light hearted and entertaining plenary on the importance of connecting with the public in the right ways to ensure we, as scientists, get the right messages across to the general public. His take home message was don’t tell people the facts, no-one likes to be told what to think, instead teach people how to discover the facts. And a great example of this was the “Modified,” retrofitted food truck in the hotel lobby that was serving free tastings of genetically modified, with a side of science communication, allowing you to interact and talk to many of the presenting scientists at the meeting.

Big rush to grab the GMO papaya parfait and smoothies at the @eat_modified food truck after the great plug from @Sarah_Evanega #PAGXVIII keynote pic.twitter.com/x8CIX81nd4

The National Center for Biotechnology Information (NCBI) was well represented at PAG this year with speakers in a variety of sessions on the various services and tools they provide to the genomics communities, including a presentation by Terence Murphy of the use of Stand-Alone pGap tool. The prokaryotic genome annotation pipeline (pGap) tool is openly available in github for anyone to download and use on their own systems, it includes both abinitio protein coding region predictions with geneMark as well as by homology based on both BLAST and HMM profiles. This allows users to identify various erroneous features in genome annotations prior to submission to GenBank.

Evgeny Zbodnov (SIB, EZlab.org) described the latest version of the BUSCO tool used to assess the completeness of genome assemblies. BUSCOv4 now uses a different prediction software to find predicted genes within genome assemblies, and as such is now able to handle prokaryotic genomes as well. As we publish so many genomes presenting BUSCO scores we and other journals will need to start encouraging our authors to upgrade to the new version.

While the field of genomics was still the main focus of many of the presentations, there was a noticeable number of talks about phenotypic aspects of plants with a lot of studies utilising imaging, both of above ground and of roots (image- from W129 Comprehensive Above and below Ground 3D Phenomics for Grasses, Mao Li (Donald Danforth Plant Science Center)). Ian Stavness (University of Saskatchewan) in the Plant Phenotypes session also presented on the use of drones for imaging entire fields of crops. Another interesting application of genomics on display was ancient DNA, utilized in a number of conservation and evolution talks, as well as the excellent keynote from field pioneer Eske Willerslav.

The Vertebrate Genome Project (VGP) workshop spanned the whole final day workshop with a packed room at the other venue for the conference. Workshop and VGP Chair Erich Jarvis gave the introductions, he explained the history of the VGP and how it fits into the larger ecosystem of big genome projects like G10K. The VGP has released 101 complete genomes from their Genome Ark website 2019 and are on target to release 260 in 2020, but still seeking additional financial support to achieve that goal. The group currently has 11 manuscripts in preparation to mark the completion of these phase1 genomes, and we’ve already published “platinum grade” and VGP listed genomes including the barn swallow.

As a useful gathering of the VGP community before their big yearly meeting in the summer, many of the key members were present and presented updates on sample procurement and preparation, the latest in sequencing technology (with benchmarking), Kerstin Howe (Sanger) presenting a “little shop of assembly curation horrors”, and then some updates on discoveries and outputs, and potential future developments. The Darwin Tree of Life Project was present and gave some lessons learned from their regional (UK) perspective of systematically producing and disseminating high quality genomes. One of the new projects presented that really showcase where this new era of genomics is going to was Benedict Paten’s (UCSC) talk on a new “Human Pangenome Project” refurbishing and viewing in a new way the human reference sequence. Aiming to sequence up to 350 diverse human genomes using state-of-the-art technologies to incorporate high-quality sequences that are more broadly representative than the current human reference. Especially since we are finally in an era of “telomere-to-telomere” assemblies. It was an exciting end to the meeting, and we look forward to see what developments in the plant and animal genome world will be underway when the conference is ready for its 29th edition in its promised completely upgraded shiny and new venue next year.