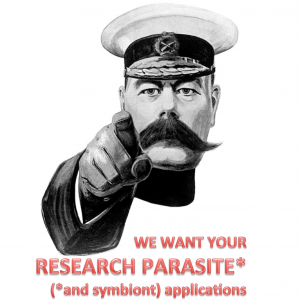 As a journal focussed on open science we are big promoters of research parasites (and research on parasites), and try to feeds them with open data and tools. It is therefore appropriate this is the second year GigaScience has supported and sponsored the Research Parasite awards. In one of our Q&As, organisers Casey Greene and Brian Byrd tell us about the awards, how they came about, and you can become a tropical research parasite by winning a travel grant to the Pacific Symposium on Biocomputing in Hawaii.

Casey Greene (CG) is an Assistant Professor of Systems Pharmacology and Translational Therapeutics in the Perelman School of Medicine at the University of Pennsylvania. His lab develops deep learning methods that integrate distinct large-scale datasets to extract the rich and intrinsic information embedded in such integrated data. J. Brian Byrd (JBB) is an NIH-funded physician-scientist interested in high blood pressure. His lab focuses on the clinical investigation of hypertension, using proof of concept clinical trials, among other types of studies. In addition, Dr. Byrd was an investigator for the SYMPLICITY-3 HTN pivotal clinical trial of renal artery denervation for treatment-resistant high blood pressure.

Tell us about the parasite award. What inspired you to set it up? What sort of parasites are you looking for, and what can they win?

CG: I, like many scientists, was annoyed at the tone of the Longo and Drazen editorial. The behaviors that were described as parasitic, namely reanalyzing data and potentially arriving at different conclusions, struck me as central to the practice of good science and exactly what we try to teach students at many phases of their training. Identifying a distinct interpretation that is compatible with existing data is often an excellent start to a qualifier exam. Iddo Friedberg tweeted a joke about a research parasite award. It struck me as an excellent opportunity to encourage, as opposed to discourage, these types of behaviors, so I was happy to work to make it a reality.

I propose a new science award: “The Research Parasite Award is given to those who used someone else’s data to do some really cool sh*t”

For this award we’re looking for scientists who have analyzed someone else’s data and published their findings independently of the data generators. Our goal with the award was to reward precisely the approach to science that was decried by the “Research Parasites” editorial. Candidates came from many fields, which really excited us, as we have a very broad definition of Research Parasites. We view the term “Research Parasite” as entirely complementary in this context, and we specifically want to encourage individuals who identify with groups that are underrepresented in their field to apply. 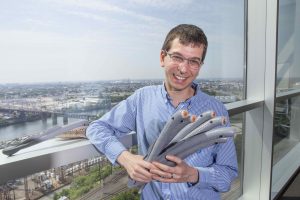 There are two Research Parasite awards this year. The Senior Parasite will receive a leather lamprey with a magnetic head that they can stick to any ferromagnetic surface. The Junior Parasite will receive this lamprey, as well as a $500 cash prize and $2950 in travel support to attend PSB. We estimate that this is sufficient to cover airfare from much of the world as well as hotel costs for enough nights to receive the award.

As this is the second year of the competition how was last years award received and who won it? Were nominees proud to be parasites, and did the people who coined the term “parasites” get or respond to the joke?

CG: The winners were Kun-Hsing Yu and Erick Turner. As committee members we enjoyed reading all of the applications, and the decision was extremely difficult. We’ve got short bios of the winners plus their work on our website, http://researchparasite.com. The nominees were clearly proud parasites, which made us happy to see.

Last years award seemed to be well received. Dr. Jeff Drazen, one of the authors of the editorial in question, was a good sport and attended PSB and answered our questions immediately prior to the award presentation. It’s always hard to say what others find funny, but I think Jeff understands where we were coming from with the award. I think that we both would be happy to move beyond the negative research parasite term, to more positively recognize the exemplars of science enabled by open data.

Were there any interesting lessons you learned from doing this, and what are you doing differently this year? Tell us about the “symbiont” award?

CG: We had a wonderful time doing the awards, but it was a learning process for us as well. We enjoyed reading the applications that were submitted, and the serious purpose but tongue-in-cheek nature of the awards led to some great application letters. I enjoyed hearing the perspective of our winners during the awards ceremony. I would like to see us record the ceremony this year (this reminds me that I need to contact the PSB organizers!) so that it can be widely shared, including to those who are unable to attend the meeting.

On the negative side, we were disappointed that we didn’t simultaneously recognize those who had shared data in ways that encouraged independent reuse. In retrospect, this was an oversight on our part. We decided to start a “host” award for those who were exemplars in data sharing. However, we found that the terminology wasn’t quite right, because often the individuals whose data were reused were not negatively affected by the reuse. We searched for a term for a bit, and ended up settling on the term “symbiont” that refers to organisms that live together. The relationship can be mutually beneficial because it increases the scientific impact of those investigators, so we moved a away from the term “host” even though it breaks the symmetry with the Parasite Awards. The website for the Research Symbiont Awards is http://researchsymbionts.org. 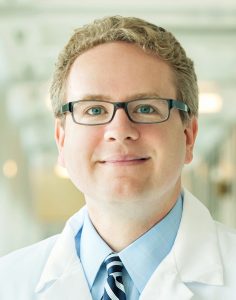 JBB: I’m a clinical investigator, and in that role, I run a laboratory & I have been directly involved in clinical trials. As Casey and I got to know each other, I shared my hope that something could be done to recognize people who generate data and share the data. Casey & I share the vision that data sharing is good for many reasons, and I am happy to be the inaugural Chair of the Symbiont Awards Committee. The committee is a diverse group with keen insight, and we look forward to selecting the awardees. We have two awards for people who have shared data above and beyond what is expected in their field. We have an award for an early career researcher involved in human health research, and one for a more senior researcher, who can be working in any scientific discipline. We hope the Symbiont Awards help nudge the culture of researchers toward more data sharing, and we are excited about the opportunity to recognize those who already are setting the standard.

As an open science/open data journal we try our best to help feed and support the research parasite community, at the same time as giving credit and sustenance to their hosts. Is there anything we and other journals could and should be doing to help this process even more?

CG: One of the things that we’ve seen is that researchers can resist openly sharing their data for a number of reasons. One concern that we hear frequently is that someone might download data and analyze it without fully understanding its nuances, leading some of those performing re-analyses to make findings that are trivial or incorrect. We’d support a mechanism that encourages authors of highly re-used datasets to write periodic reviews to summarize the findings of reanalyses . This would also provide an opportunity to independently weigh in on these efforts.

Of course, making it as easy as possible for researchers engaged in reanalysis to directly recognize the datasets that they used in their work is important. Right now, this is primarily done via citation. However, some journals limit the number of references that can be used in a given manuscript. I’d encourage journals to do away with these reference limits and to concurrently work on supporting the option more granular citation forms, which could enable researchers to separately note the source of data, ideas, software, and other elements.

Fortunately we promote citation of all research objects (data, software, workflows, etc.)  and encourage the inclusion of as much technical detail as possible in the body of manuscripts.

What is the plan for the awards beyond 2018, and do you have any final thoughts on this type of process?

CG: We’ve received some generous financial gifts for these Awards for Rigorous Secondary Data Analysis (colloquially called the Parasite and Symbiont awards). These gifts have allowed us to establish an endowment that will, starting with the 2019 award year, provide modest prizes to recipients. If anyone would like to help us recognize data sharing and reuse, we’d be happy to work with them and we have a URL available for gifts to this fund: https://giving.apps.upenn.edu/giving/jsp/fast.do?fastStart=simpleForm&program=MED&fund=404893&bhcp=1

In closing, I want to note that we’ve really enjoyed putting together these awards. We think there’s a very nice opportunity for copycat or franchised awards at the society level. We’d love to see communities build awards to specifically acknowledge their own exemplars of data reuse and data sharing. The applications that we receive are quite broad, and I’m sure that there are many societies who could find great Parasites and Symbionts in their midst. I guess what I’m really saying is that we’d like to see the “Research Parasite Award”-Parasites get their acts together!