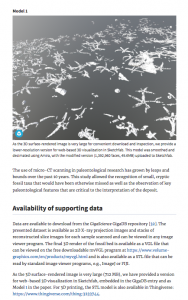 Just out in full text is a our first paper showcasing our latest complete integration with the Sketchfab 3D viewer. In this a 3D fossil seabed from the lower Devonian geologic period has been digitally reconstructed using micro X-ray computed tomography (microCT) imaging. A section of the fossil bed, measuring 2 x 1 metres wide with an average thickness of 4cm, shattered into 55 fragments during excavation in the region of Karbonaatjies farm, Western Cape, South Africa. Researchers at University of Cape Town and Stellenbosch University CT scanned 24 of these rock fragments, and then digitally re-assembled them to generate a 3D reconstruction of the fossilised remains. The re-assembled ‘jigsaw puzzle’ offers intriguing detail of a panoply of prehistoric marine organisms including stylophorans and brittle stars. The same group  previously published microCT of extant (and still pregnant) brittle star species with us (that were featured in Echinoblog, GigaBlog and in the Atlantic) but this this takes the study of this species back to our prehistoric past. Bringing lost worlds to life in colour and 3-dimensions. 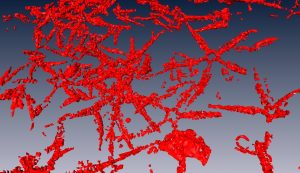 Brittle stars and stylophorans are both types of echinoderm, the phylum in the animal kingdom that includes starfish, sea cucumbers and sea urchins. Most extant species of echinoderm, including brittle stars, show pentameric symmetry in their body plan. Stylophorans are an extinct species of echinoderm that are unusual in that they lack a pentameric body plan and are instead markedly asymmetric. The use of microCT enables striking detail to be observed in the fossilised remains, enabling the morphology to be explored in fossilised echinoderm specimens as small as 20mm in diameter. In addition, the sheer number of specimens is outstanding, with the 3D reconstruction showing over 1,000 brittle star specimens and hundreds of stylophorans.

According to the authors, the stylophorans and brittle stars were rapidly buried by sediments during a prehistoric storm 400 million years ago. This type of rapid smothering of seafloor-dwelling communities is known as an obrution event. The presence of fossilised stylophorans and brittle stars within the same obrution bed highlights that these communities were to be found in a similar geographic location at the same time in the very remote past. We are unclear of the exact ecological role of these ancient echinoderms, but it is of great interest that researchers of extant species have uncovered a critical role of brittle stars and sea stars in preserving coral reefs. In extant species, this is thought to be due to the echinoderm’s ability to brush away sediment from the coral, which greatly improves its health.

New Integrations in GigaScience: Sketchfab and Thingyverse
3D visualisations are a powerful means of exploring fossil morphology and a Sketchfab 3D viewer, embedded in the paper enables the reconstructed fossiliferous obrution deposit to be explored using a web browser. We previously have been embedding the Sketchfab images in the associated dataset landing pages of our GigaDB database (see more on this in GigaBlog), but this is the first example where Oxford University Press can now embed these in the online version of our paper.  The original surface-rendered image file generated by the South African research teams was very large (>700MB) and so the GigaScience team generated a version of this 3D reconstruction with smaller file size (<50MB) that is more suited to interactive exploration using a web browser. The ability to build upon the original model in this way is due to the Creative Commons CC0 1.0 Public Domain Dedication license ascribed to these data. GigaScience is a firm advocate of Open Data and CC-licenses, and the Creative Commons CC0 1.0 Public Domain Dedication waiver applies to all published data in this journal.

GigaScience has published many microCT datasets, and interactive visualisations of the 3D reconstructions are all made publicly available via our Sketchfab portal (https://sketchfab.com/GigaDB). This palaeontology example of fossilised echinoderms is the latest in a growing collection of GigaScience 3D models that includes 3D reconstructions of museum specimens. Using the Sketchfab viewer, researchers and citizen scientists can use their computer or tablet to explore the stunning morphology of weird and wonderful biological specimens including Jackson’s three-horned chameleon, snake fangs from twenty different serpents, and crustacean morphology of seven species of hermit crab. 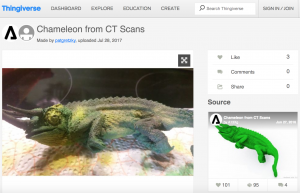 More recently, the GigaScience team have made all 3D printable STL files publicly available on Thingiverse, which is a widely-used resource dedicated to the sharing of 3D digital designs. The Thingiverse ‘Universe of Things’ is a repository for discovering, making and sharing 3D printable objects, and these can include characters designed and created using digital media. GigaScience is using the Thingiverse platform to share real-world examples of 3D biological specimens to a wider community, including educators, game developers, graphic designers, and digital artists (https://www.thingiverse.com/GigaScience/designs). One of the best things about the platform is its active community who share, discuss and compare “makes” of their models.  It’s brilliant to see what downstream users have managed to do with our Jackson’s three-horned chameleon data, even if it didn’t survive a summer of their son playing with it.

The scope of GigaScience covers both biological and biomedical data, and these fossil echinoderms are our first example of palaeontological data. We believe that this recent and wonderful addition will have useful implications for understanding echinoderm biology and evolution, and provides an invaluable perspective on the palaeoecology of marine organisms in the deep past.

Links:
Interact with the 3D fossil seabed on Sketchfab:

Interact with the 3D printable version of the fossil on Thingyverse