Neuroinformatics Gets Tropical Down Under

What does Neuroinformatics and The Great Barrier Reef have in Common? Both are faced with challenges and comprise of beautiful colourful entities that should be freely accessible and shared.

This year’s International Neuroinformatics Coordinating Facility (INCF) Neuroinformatics 2015 meeting was held in the northern tropical Queensland city of Cairns, Australia. With coral reefs and the Daintree tropical forest nearby, as well as highly interesting sessions – delegates were certainly spoilt. INCF Executive Director, Linda Lanyon, kicked off the meeting outlining the long pioneering history of Cairns and Neuroinformatics – with big brain initiatives, growing awareness and demands for reproducible research and the rising cost of treating brain diseases being the three current drivers of this research community. Lanyon emphasized that creating big data is easy; however, more resources are required to curate and integrate it. With a lot of existing multi-omic neuro data, there are a clear lack of standards and data integration across all scales, with a strong need for more reproducible research to maximise its utility.

Teiichi Furuichi (Tokyo University of Science) presented on ‘The molecular mechanisms of brain development and disorders’ and highlighted his group’s efforts to create an integrated database –Brain Transcriptome Database (BrainTx, formerly known as CDT-DB) for visualizing and analyzing the transcriptome that underlie the various stages and states of the mammalian brain. The integrated database has spatio, temporal, brain region pattern and tissue distribution pattern information with three image viewers. Furuichi also highlighted recently published work on a mouse model with autism-spectrum disorder-associated mutations – Specifically work, published in Scientific Reports, on a CAPS2 (Ca2+-dependent activator protein for secretion 2) KO mouse to understand the relationship between chronic stress, anxiety and depressive disorders with weight gain.

GigaScience, Editorial Board Member, Ann-Shyn Chiang (National Tsing Hua University, Taiwan) gave an impressive talk on neuroinformatics of the fly brain. In order to understand how genes and circuits orchestrate complex behaviours in the fruit fly, Chiang’s group previously generated a comprehensive brain wiring map containing specialized systems defined by the diversity of individual neurons. In addition, they also created an open access database of Drosophila brain neurons, called FlyCircuit –where one can archive, cell-type invent, browse, search, analyse and 3D-visualise 16,000 individual neurons in the Drosophila brain. Chiang also highlighted the rather impressive release of FlyCircuit 1.2 with several new features, such as images of 30,000 neurons with assigned axon/dendrite polarity for each. They have created a sequence ID for each individual neuron by transforming a 3D skeleton into a 1D sequence for high-throughput data mining, and provide a novel image matching algorithm for searching genetic drivers containing specific target neurons. Chiang stressed that their Drosophila brain connectome can be used as a template for understanding the human brain; however, since the brain doesn’t work in isolation, a whole body connectome is also required and of course, challenges remain, such as whole brain cell typing, discovering drivers for manipulating target neurons and creating an integrative connectome. In an impressive attempt to tackle these challenges, Chiang’s group created a new tool – Fly head Array Slice Tomography (FHAST) for automated in situ brain imaging. This enables them to image every single neuron involved in complicated behaviour, throughout the whole fly body – and they are now in the process of completing the first whole-fly functional connectome.

Although brains were the main focus of this year’s meeting, it was nice to see that vision and eyes had an impact too; Arthur Lowery (Monash University, Australia) gave an entertaining presentation summarizing 5 years of efforts of the Monash Vision Group to develop a Bionic Eye, which he described was made on the head of a sheep instead of on the back of a sheep. 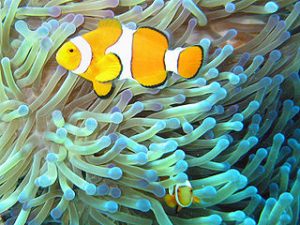 A pioneer of brain imaging research, Richard Frackowiak (Ecole Polytechnique Fédérale de Lausanne, Switzerland) summarized how modern informatics can further our understanding of brain diseases – highlighting that data and knowledge on brain disease are growing exponentially, but are increasingly fragmented; however, new ways of looking at the brain have dramatically increased therapy and understanding of disease. He used Alzheimer’s disease as an example, where classification of the disease using only pathophysiological abnormalities is not very specific – and new integrative methods are required. Frackowiak presented the European Human Brain Project’s proposed medical informatics platform that benefits from modern advances in information technology, super computers and interactive databases coupled with maths and statistics that will enhance and integrated existing and future clinical and neuroscience data – thus fostering a more biologically based approach to tackling brain disorders.

Following, Thomas Lippert (University of Wuppertal, Germany) nicely summarized the aims of the Human Brain Project, which is to create an open neuroscience-driven infrastructure for simulation and big data aided modelling and research. The project’s simulation and data analyses infrastructure will be based on a partnership of super computer and data centres that will contribute to specific requirements by the community; comprising of a variety of services ranging from the molecular to synaptic and neuronal levels up to cognitive and robotic models.

It is no news that data sharing, integration and interoperability in addition to reproducible science is a strong driver of GigaScience, and these unsurprisingly, still remain as prominent barriers in neuroscience that the neuroinformatics community are strongly attempting to overcome. Our Editorial Board Member, Russell Poldrack (Stanford University), highlighted in a recent article in Vox that brain imaging research is often wrong, which sticking a dead salmon in a MRI strikingly demonstrates, and his efforts on how to change this and produce more reproducible results. Being reproducibility and workflow management nerds it was great to see a variety of talks from different groups creating new tools, pipelines and standards to overcome such problems with interpreting neuroimaging data. David Keator (UC Irvine), presented on Standardizing Brain Imaging Data– work done by the Neuroimaging Data Model Working Group (NIDM WG), which was formed as a sub group of an INCF Task force, in order to design a metadata model for neuroimaging to improve data sharing and enhance reproducibility of existing neuroimaging data. Keator highlighted current efforts on the NIDM experiment model that describes the minimal data required to understand an experiment. The group also created a model for describing workflows, such as what happened to the data including when and what parameters; thereby, allowing users to replicate results, processes and data generated from diverse analysis pipelines in use today. 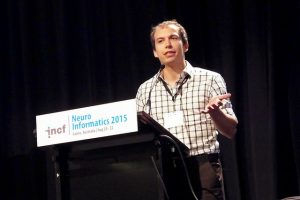 Chris Gorgolewski (Stanford University), then presented on the Brain Imaging Data Structure (BIDS) – a new standard to organise neuroimaging data. He highlighted how easy it is now to generate neuroimaging data, but many studies are similar and have similar file formats (e.g., DICOM, NIFTI) across different platforms. However, there are differences in the way people arrange and describe their data, even within the same lab – which leads to data sharing within a lab difficult, as well as writing software for automated processing – there is a lot of manual input of metadata when running processing pipelines, and no way to automatically validate completeness of a given dataset. BIDS is specifically targeted at PIs to use so they can inform their students how they would like data to be organized, and allows for more easily shareable data and metadata within a lab, between collaborators or publicly. Adopting BIDS will also help developers write more efficient pipelines, as well making curation easier for data curators. As a previous author of an . Since BIDS is continuing to be developed, Gorgolewski urged the audience to visit the BIDs website and add feedback.

Cameron Craddock (ChildMind Institute, USA), presented a quality assessment protocol for pre-processed data, to measure the quality of fMRI data. A major goal of the pre-processed connectomes project (PCP) is to put the data into the hands of mathematicians and statisticians to help understand the data, as well as make the data widely available to the greater community so that data can reused and enhance reproducibility of results. However, since little is currently known as to what measures are best indicators of quality, and what ranges of values constitute “good” or “bad data” – this presents particular problems with resting-state fMRI (R-fMRI) data where there is no means to distinguish signal from noise, and researchers are having to visually inspect each image captured to assess data quality. Craddock and colleagues created the PCP quality assessment protocol as an open source pipeline in Python using Nipype, which can be used to assess pre-processed connectome data – taking roughly two minutes to run an assessment. They have also created a repository for data measurements where researchers can assesses which measures were most reliable, correlated with each other and more sensitive. Craddock also encouraged the audience to join the upcoming BrainHack Americas event (October 23-25), spanning several cities throughout the US, Canada and Brazil, in which the flagship event will be in Queretaro, Mexico. Watch this space for more on that.

This year’s meeting certainly highlighted great advances being made, as well as big challenges for the neuroscience community to overcome; it’ll be interesting to hear of how the field has advanced at next year’s Neuroinformatics 2016 meeting in Reading, UK. GigaScience is helping disseminate the challenges and advances facing fMRI data specifically through our open series “fMRI: Advances and Challenges”, Guest Edited by Russell Poldrack (see his blog). Our exciting series showcases several reviews and commentaries by key leaders in the field who are actively promoting open neuroscience and seeking to improve reproducibility and open fMRI data. As an innovative journal moving away from traditional publishing, GigaScience publishes ALL research objects with data being hosted and/or mirrored in our database, GigaDB, and implementation of open tools in our Galaxy-based platform, GigaGalaxy – to improve reproducibility of analyses. We welcome submission of Research, Technical Notes or Data Notes in Neuroscience.