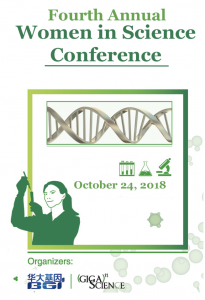 As an Open Science journal, one of the main aims of GigaScience is to break down barriers. Both in the access of research and the underlying data and code supporting it, and the barriers holding back the researchers themselves. With that in mind GigaScience just organised the Fourth Annual Women in Science Conference, a satellite meeting of the International Conference on Genomics (ICG-13). The conference took place on the 24th October 2018 and was hosted by BGI at the spectacular China National GeneBank building. For the fourth year in a row, the meeting was organised by our Editor-in-Chief Laurie Goodman, and provides a platform for both young and more senior women researchers to present their work and to discuss issues that affect women in science. Providing a safe space for women to be open about the barriers (e.g. casual sexism, misogyny, and the Motherhood penalty), which they may have met during their careers. And also provide useful practical guidance in areas that are measurably responsible for the gender gap in science such as grant writing. Making an important point in her introduction, Laurie stated that women often have less physical presence than men and this can be intimidating. Women don’t need to change, the environment in which we work needs to celebrate the differences between men and women and use those to the benefit of Science.

We were delighted to welcome Keynote Speaker Dr. Maryam Matar, Founder and Chairperson of the UAE Genetic Diseases Association. Maryam told us about her work, with additional insight into the challenges and obstacles she has faced as a senior female scientist in the Arab world.

The winner of the  Young Women Researcher Travel Award was Dr. Sherine Awad Mahmoud. Post Doctoral Fellow, Queen Mary University of London. Sherine presented her work on “Evaluating Metagenome Assembly on a Simple Define Community with Many Strain Variants”. The award covered her travel to the ICG meeting in Shenzhen, and thanks to the generous support of Huawei we also presented her with a brand new P20 mobile phone at the prize giving ceremony alongside the GigaScience prize track winners (watch this space for an update on who won the $1000 prize and videos of the talks).

Following a day of fascinating and insightful talks and discussion, the delegates were invited to attend a reception on the terrace of the beautiful CNGB building, where they were joined by delegates of the ICG-13 conference.

This year the meeting felt particularly timely in coming in the same month Donna Strickland became the first female Nobel laureate for physics in over 50 years. Having to win that award before getting tenure or being featured on wikipedia. These types of stories are unfortunately not isolated, and a particularly memorable insight on the travails women scientists have to deal with can be seen on this fantastic presentation given by Marie Claire King (discoverer of BRCA1) at the World Science Festival.