In Sultry Switzerland, Bioinformatics is Radiant at ISMBECCB 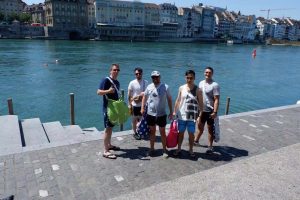 Water cooling of our datacenter (& friends)

Regular readers will know GigaScience originally launched at the 2012 ISMB (Intelligent Systems of Molecular Biology) meeting in Long Beach, and every subsequent year the conference has held a special place in our hearts as the place where we celebrate our birthday (see all the previous write-ups in GigaBlog). Being hosted in Basel, this was also our second time at an ECCB meeting (the concurrent when in Europe sister meeting of ISMB) in the city, but this time Switzerland really broke its stereotype as a land of alpine cool and the delegates roasted in Europe’s record heatwave (officially the hottest month ever recorded) getting close to 40 degrees during the meeting. As a result most of the conference (including the curation team) had to regularly jump in the Rhine to cool down, utilising the “wickelfish” waterproof swimming bags handily on sale at the conference venue. Those of those on dry land and attending the talks were rewarded with an airconditioned and packed venue covering many tracks and flavours, with many special sessions and tracks, and 20-community led COSI (“Communities of Special Interest”) mini-meetings running concurrently.

Being an Open Science journal that mandates OSI-licensed software we’ve always been big supporters (and for the last few years, sponsors) of BOSC – The Bioinformatics Open Source Conference. Last year changed things with BOSC moving to be held every other year with ISMB, and next year it will again be co-hosted with the Galaxy Community Conference in Canada. Many of the other COSI’s such as BioVis, Function (of which we’ve previously published a series), Bio-Ontologies, 3DSIG, and Microbiome also tempted us into their talks as well. And even though BOSC is not always present at ISMB, its ethos remains throughout the conference, particularly in special tracks covering open and FAIR infrastructure from the NIH Big Data 2 Knowledge Program and the EU’s ELIXIR distributed infrastructure for biological data. The BD2K track this year covered the role of publishers in supporting FAIR science, and it was interesting to see the NIH’s efforts in linking publication abstracts to data resources, as well as their trial with figshare. With a new safe code of conduct and childcare arrangements, ICSB (particularly with help from BOSC) has always pushed itself to be an open and inclusive environment. With this hopefully increasing the diversity of the participants (including the Notorious Ada), these wider perspectives moving the scientific discussion beyond the usual preconceptions to widen discussion and insight into new areas. Even in some of the incongruous sponsored sessions such as the Philip Morris special track on “Reproducibility of findings from big data” the focus was on the benefits of open data and transparency. 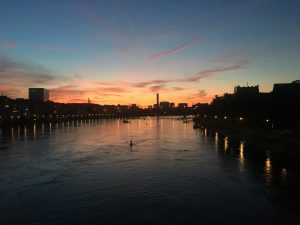 The Rhine flowing past ISMBECCB at dusk.

Heading Downstream of the Many Computational Biology Streams
BOSC included many talks on work familiar to us such as the recently published CWL-metrics from Tazro Ohta. As we are starting to see Common Workflow Language submissions come through the journal, it was encouraging to see a growing number of projects utilising CWL in the COSI, including Stian Soiland-Reyes using it as lightweight approach to Research Object packaging. Nicky Mulder delivered a great keynote on “Building infrastructure for responsible open science in Africa”, highlighted the lack of African genomics data repositories, and how H3ABioNet Pan African Bioinformatics Network for the Human Heredity and Health in Africa (H3Africa) consortium is trying to fill this gap. Branching out to other sessions, the BioVis COSI track aims to “educate, inspire, and engage visualization researchers in problems in biological data visualization, as well as bioinformatics and biology researchers in state-of-the-art visualization research”, and delivered what was promised. Keynote speaker Lindsay Edwards’ (VP of AI at GSK) presented novel use of 3D visualisation as a means of understanding how neural networks work. And Wouter Meulemen of the Altius Institute presented Epilogos, which is a much-needed visualisation tool that is used to deliver interactive summaries of chromatin states. It is well established that epigenomic marks are associated with functional elements, but the data cubes that are used to analyse multi-epigenome datasets are notoriously difficult to interpret from a visualisation perspective. Epilogos uses Hidden Markov Models to transform 3D data cubes into 2D matrices, which are a much more intelligible visual summary for the end user.

In the 3DSIG presentations, not having to travel far, Torsten Schwede from Basel University provided a history of Swiss-Model, which for 25 years has been one of the most accomplished protein structure tools. Swiss-Model is a fully automated protein structure homology server and has been used to support a paradigm change whereby researchers may now begin their project with a protein model and/or crystal structure rather than the more traditional approach whereby such structural data would be an outcome from a research project. Torsten explained that there are 30% intrinsically disordered regions on the human proteome, and these present a challenge for computational biologists. Torsten was quick to point out that Swiss-Model provides predicted protein structure, and the salient need for confidence values to ensure researchers understand how accurate these predictions are. And his statement that “benchmarking of structure prediction techniques is crucial” is sage advice for the 3DSIG community. In the RegSys (Regulatory and Systems Genomics) COSI, Julia Zeitlinger (Stowers Institute) offered incredible insight into how computational analysis can be used to understand the role of Yamanaka factors in pluripotency. Key in generating induced pluripotent stem (iPS) cells.

Dipping in and out of all this science at ISMBECCB, it was great on the penultimate day to celebrate our birthday with over 100 other delegates and members of our Editorial Board at 1777 Kaffee Restaurant Bar in the old town. Over the years our GigaPanda t-shirts have been provided quite a stir (causing a mini-riot in 2014), and this year the debut of our new “Cyber Panda” t-shirts was quite a draw in getting people to walk across the Rhine to our party (you can see the pics on facebook). The design this year was kindly donated by mathematically inspired artist Gregg Helt, and algorithmically generated via an Iterated Function System that iteratively transforms an initial point by hyperbolic tiling and rhodonea curve transformations. On top of the design being printed in t-shirt form he provided links to the open algorithm so others can print, adapt and fork the design themselves (handily also linking to his GitHub repo). Hopefully meeting the open ethos of the whole conference, and the t-shirts were obviously a hit as they ran out within minutes.

The next meeting in Quebec will be another great and popular venue for us to celebrate our 8th birthday. Hopefully in warm surroundings again sitting on a Terrasse. We hope to see many of you there.