ECCB 2012: Bioinformatics with a Swiss Flavour 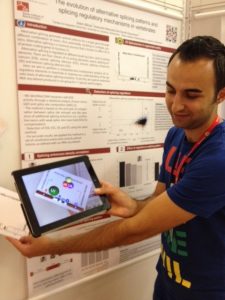 In the midst of a busy few weeks of European meetings, GigaScience is currently in Basel, where ECCB 2012 (the European Conference of Computational Biology) has just ended. Usually overshadowed by its bigger sibling: the ISMB (particularly when both meetings are in Europe and co-hosted), this was the first time that I had attended the stand-alone meeting and it more than justified being a stand-alone event. A lot of this had to do with the ruthlessly efficient organisation from the Swiss Institute of Bioinformatics. Despite the meeting having double the number of expected participants (nearly 1,200), the conference organisers took it it in their stride, also injecting a very regional flavour, with cowbells calling people to sessions, local musical highlights (including the incredible Cristoph Denoth) and Swiss culture and food on display.

Most of this was very welcome – comparisons were made with the unhealthy lunch packs given at ISMB to the hot food and beautifully presented salads and desserts at ECCB. The comparisons were not positive 100% of the time though. With ISMB having a focus on open-source software and hosting the BOSC satellite meetings (see our write-up of the last one), there were a lot of sponsored commercially focussed sessions in the tech track here, including one with a spokesperson from Philip Morris and a lawyer giving advice on patenting biological software that would possibly not have been as politely received in Long Beach this year.

No rest for the Wiki
One useful continuation from the ISMB was the official opening of the ISCB wikipedia competition initially announced at the July meeting (see our positing here). With the aim of improving computational biology content in wikipedia, by providing a financial incentive (a $500 prize announced at the meeting) to ecourage contributions. The competion is open to students, the deadline is the 10th of January 2013, and if you are eligable you might also be able to get a PLoS Computational Biology paper out of your work as well. To further promote Wikipedia in the community, there was a one day tutorial on “Editing Wikipedia for Scientists” held at the meeting, so hopefully things should be well primed for an explosion in coming months of good quality computatonal biology related content.

The sequencing slump
Especially arriving straight from the Genome Informatics meeting in Cambridge, there seemed to be slightly less talks on sequencing and a more on protein interactions, modelling and pathways than most bioinformatics meetings. There were still some talks on metagenomics, splicing and annotation, and Lachlan Coin presented on some work he has carried out with the BGI on copy number variation and disease association (just published here). There was also a few talks on medical informatics and data mining, Soren Brunak hosting a session on medical informatics infrastructure and ELIXIR, as well as his keynote on mining patient e-records for adverse drug reactions.

One interesting talk that nested between was from Sebastien Schultheiss, on his work promoting the persistence and availability of computational web resources. Similar to the seminal Alex Bateman paper on “data tombs” relating to online database, Sebastien was showing the incentives of providing more stable websites (more citations!), as well as promoting best practice and tools for journals and reviewers. Producing his own persitent bioweb.me short links, as well as a LT (long-term) score sheet that reviewers can use for assessing web resources. As we have been asking our authors to submit code in relevant repositories, as well as hosting archival versions of all the scripts and tools associated with a study in our GigaDB database and giving them DOIs (see our metagenomics pipeline paper and the associated 84GB gigaDB entry), we hope we can provide additional examples of best practice. Testing the checklist on our recent Biom-format software paper, despite having all of the information in the publication, the biom website loses a couple of points on the checklist by not being so clear on the hosting country and institution on the website, so for future reference it may be useful for us to pass these guidelines to our referees.

Augmented reality versus Zombies
Another welcome highlight was the quality of the posters, with some fantastically novel and interesting examples on show. One technical advance I had not seen before was the use of augmented reality and 2D barcodes for a poster, Adem Bilican producing a tool to allow an augmented reality 3D view his poster that runs on his ipad (see the picture). The app is still in progress, but has amazing potential for structural biology meetings, enabling people to manipulate figures, make molecules rotate, and include hyperlinks in the text. Watch out for this development in the future. The broadness of the work on show also led to some imaginative presentation and subject matter. Glenn Lawyer presented on Zombie apocalypse modelling to make complex recent work on disease networks more accessible, and also provoke discussion on the spread of knowledge and “zombie ideas”. With so many ostensibly “dead” (proven to be false) ideas continuing to remain persistent and cause harm (global warming denial, vaccination and autism, etc.) it is up to the Zombie hunters (i.e. scientists) to fight them with a fast spread of knowledge. Being an advocate of open science, it was great to see Glenn posting his work on Figshare and ArXiv, and hopefully others will join his crusade to use more rapid and open dissemination of ideas to fight the Zombie menace.

With that in mind lets all encourage the Zombie hunters to keep fighting the good fight for open science!

Update 14/9/12: Adem won the poster prize at the meeting and has posted a video of the prize presentation where he does a live demo of the augemented reality feature on stage here. Congratulations Adem!