FUNC in the Fjords: Functional Metagenomics 2019 in Trondheim 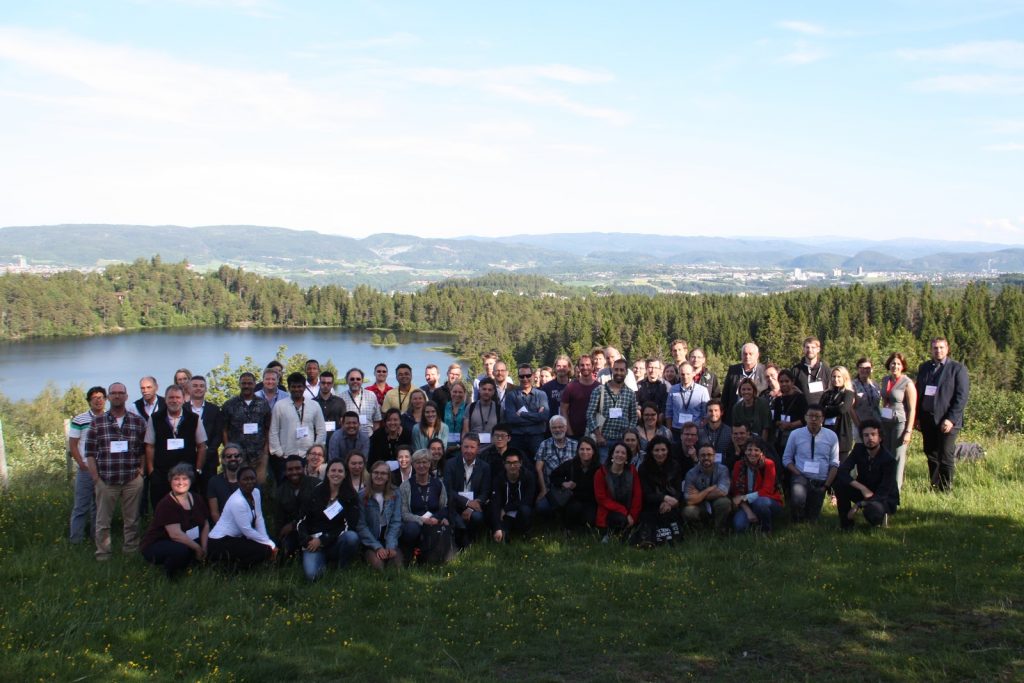 The Norwegian city of Trondheim seemed the place to be this June – with hotels in high demand  due to the BarCode Of Life conference, The Big Challenge Science Festival (including a concert by that famous science communicator Sting), and the Functional Metagenomics 2019 conference (#FMG2019) all taking place over the same period (June 16-19th). Moreover, all three events were, in part, organised by the Norwegian University of Science and Technology, NTNU. 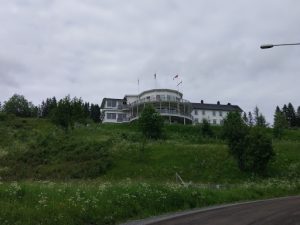 FMG2019 was making its second consecutive visit to Norway with the previous meeting (link to previous blog) held in a secluded location just 60 km north of Trondheim. This time the organisers (NTNU, SINTEF, and EU Horizon 2020 project MetaFluidics) chose to keep things closer to the city with the event taking place in the historic Lian restaurant overlooking the city and surrounding countryside.

Just under 100 delegates attended the 3 day meeting, listening to 37 talks, and viewing 38 posters from both academia and the biotech industry. Whilst the program was packed with novel and interesting science there was still time for some sightseeing and plenty of networking facilitated by the provision of splendid food at the venue for both lunch and dinner each day.

After the welcome and introduction by local organiser Alexander Wentzel (SINTEF, Norway), Edward DeLong (University of Hawaii, USA) kicked off the conference with his opening lecture on how the functional metagenomics of the oceans has evolved over the decades since the initial culture-independent microbial surveying in the mid 1980’s by Norm Pace, through to the Assembly of free metagenomes being generated directly from nanopore data now.

The first session was presided over by Trevor Charles (University of Waterloo, Canada), host of the first functional metagenomics workshop in Canada back in 2012, and guest editor for our Functional metagenomics thematic series. It contained talks from distinguished veterans of the field to a fresh PhD student just starting her career, all around the theme of phylogenetic and functional surveys of natural environments. The environments in question were the Namib desert, Pacific ocean, soft sediment, and a high carbonate sedimentary lagoon in the Seychelles. This first session set the pace for the rest of the conference, with every session drawing on multiple environments being discussed from a variety of vantage points. A selection of interesting snippets can be seen from the twitter posts #FMG2019, for example Dave Ackerley (Victoria University of Wellington, New Zealand) making use of commercially available compost being sold by the local zoo.

Topical with the recent ProMethION mock metagenomics paper we published (see the Q&A in GigaBlog), Jorn Kalinowski (Bielefeld University, Germany) was extolling the benefits of the Oxford Nanopore sequencing technology for metagenomics studies, going as far to say “the next generation of the Nanopore will make Illumina unnecessary”, meaning that he thinks the newest version of the nanopore technology will have error rates so low there will be no need to confirm the final microbial (meta)genome sequences produced using Illumina reads, as is the current practice.

The session call Applications of Functional Metagenomics hosted by Mark Liles (Auburn University USA) included talks on identification and monitoring of antibiotic resistance genes through wastewater treatment plants (Dominik Schneider, University of Göttingen, Germany), investigations into the natural decay of wood and how to prevent it (Tonje Marita Bjerkan Heggeset, SINTEF, Norway) and two presentations on the ever growing role of metagenomics in agriculture: Evodia Setati (Stellenbosch University, South Africa) describing the intricacies of environmental effects on the fungal microbiome in wine production, and Trevor Charles (University of Waterloo, Canada) discussing how the use of functional metagenomics could help agriculture and more specifically aquaponics feed the ever growing population of the planet with the introduction of precision agriculture.

Closing out the first full day was a session on Bioinformatics for metagenomics hosted by Alexander Wentzel. Paul Scholz (BRAIN AG, Germany) described how the digitization of metagenomics has the potential to speed up identification of novel proteins, with a focus on discovery of PETases from wastewater run-off from landfill site (in comparison to the glamorous and exotic locations than many of the previous presenters were sampling). The wow-factor was provided by Intikhab Alam (KAUST, Saudi-Arabia) presenting his re-analysis of all public shotgun metagenomics datasets, with a gene catalogue of >177 million unique full length genes identified to date. Microbial gene catalogues being an area that GigaScience has a lot of experience of working with, but not yet on this scale. 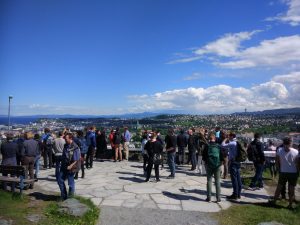 Marla Trindade (University of Western Cape, South Africa) hosted the discovery of bioactive compounds session. Mark Liles (Auburn University, USA) set the scene by presenting evidence that avoiding PCR bias by a direct cloning and NGS approaches can result in identification of not only new phyla (missed by 16S amplicon approach) but also allows discovery of biosynthetic gene clusters (BGCs) by direct expression and screening of the clones. Victor Carrion (Leiden University, Netherlands) continued the theme, presenting the discovery of >700 BGCs in disease-suppressive soils. Jeremy Owen (Victoria University of Wellington, New Zealand) shifted the focus away from soils to the marine sponge Mycale Hentscheli, where he has discovered new biosynthetic pathways for cytotoxic polyketide synthesis by the sponges symbiont microbiome. Alexander Wentzel (SINTEF, Norway) then discussed the need and introduction of new tools for discovery and production of novel products from microbial resources. This included the use of bioinformatics tools for discovery, but perhaps more importantly the use of appropriate optimized bacterial expression hosts and the creation of an inducible BGC cloning, transfer and expression system to accelerate discovery efforts. The session was closed out by a talk from Ana Delgado (University of Oslo, Norway) presenting the current issues surrounding bioprospecting with regards to the Nagoya protocol and the Convention on Biological Diversity. This provoked quite hostile reactions from some of the audience and in general the consensus in the room appeared to be that while the general intention of the protocol was good, the implementation thus far has been very poor with the only consequences anyone has noticed have been negative, i.e. restrictions on sampling with no gain for anyone.

The Tuesday afternoon was dedicated to networking with delegates also being shown the sights of Trondheim, and invited to listen to a special organ concert at the world’s northernmost medieval cathedral, Nidaros cathedral which has one of the largest church organs in Europe with just under 10,000 pipes! The networking continued with a visit at the SINTEF high throughput screening labs and a sightseeing walk, then late into the (still daylight) evening with the conference dinner at Troll restaurant on the waterfront. 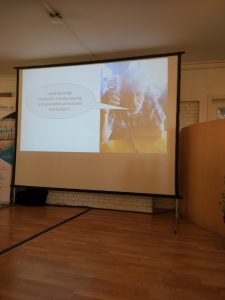 Peter Stougaard giving thanks for the conference dinner the night before his 9am presentation.

Peter Stougaard (Aarhus University, Denmark) first provided his thanks for the conference dinner on the final morning before presenting his work on unravelling the functions of hypothetical proteins by the use of combining sequence mining, phylogenetic analyses and functional characterisation.

The session on enzyme discovery also included talks from three industry representatives; Bernd Striberny (ArticZymes, Norway), Katharina Neufeld (Johnson Matthey, UK), as well as David Mead (Varigen Biosciences corp., USA). Oded Beja (Israel Institute of Technology, Israel) and his PhD student Alina Pushkarev each gave presentations on aspects of their work to discover and define the type-3 rhodopsins with the suggestion that light sensing activity through type-3 rhodopsins is ubiquitous both geographically and taxonomically with discovery of homologues in archaea, bacteria, eukarya and even viruses.

The final session was dedicated to the EU Horizon 2020 project, MetaFluidics. The session was hosted and opened by the project coordinator Aurelio Hidalgo (UAM-CSIC, Spain), with a brief introduction to the project. In short the project aims to develop new tools to speed up discovery and characterization of enzymes/proteins and bioactive compounds from environmental sources through the use of microfluidic droplet technology. Florian Hollfelder (University of Cambridge, UK) described the technology and how it can be used to screen millions of clones, followed by a variety of talks implementing the techniques to screen; 3×106 clones from rhizosphere microbiomes (Patricia de Francisco, Centro de Astrobiologia, Spain) for cold resistance genes; millions of clones from various fecal samples (Michael Roggenbuck, Novozymes, Denmark) for hydrolases discovery; and glycan mediated interactions in mammalian guts (Gabrielle Potocki-Veronese, INSA, France). In addition, PhD student Che Fai Alex Wong (NTNU, Norway) described a titratable cell lysis system that enables controlled cell lysis in the microfluidic droplets for the controlled release and detection of intracellular products. 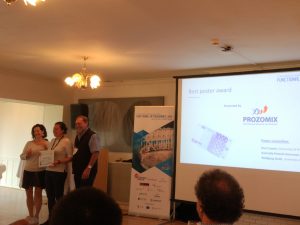 The conference was closed out by the presentation of the Poster award winners; In third place was Alina Pushkarev (Technion-Israel Institute of Technology, Israel) for P27 “Let there be light project: A distinct abundant group of microbial rhodopsins discovered using functional metagenomics”. In second place, Miguel Tovar, (Hans-Knöll-Institute, Germany) for P36 “Mining the treasures of microbial diversity with droplet microfluidics”, and taking the top prize of €1000 (generously sponsored by Prozomics) was Jennifer Chow (University of Hamburg, Germany) for P7 “New paths leading to industrially relevant hydrolytic enzymes”.

A final summary of the entire conference was presented by Trevor Charles (University of Waterloo, Canada), who also announced that he would be the chair and local host for the next meeting sometime in 2021, somewhere in Eastern Canada, details yet to be determined.

Thanks for reading, and just a reminder that our thematic series on Functional Metagenomics (Meta-Func) is still open for submissions.