Of Mice and Men (and Monkey) Microbiomes.

Research just out in GigaScience introduces the macaque monkey to the microbial gene catalogue club, joining other important model organisms including the (also recently published in GigaScience) Rat, Mouse, Pig and Cow. To explain more, in this posting we give some insight into what this data shows, and how this growing library of gut microbial genes can be used to better understand human health. 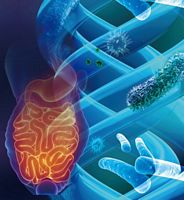 While the famous quote that there are 10 times as many microbial cells cells in the human body as there are human cells has been scaled back a bit, there is no doubt that in terms of numbers of genes we are massively out numbered by genes in our “other genome”, the microbiome. In 2014 our colleagues at BGI published an integrated catalogue of reference genes in the human gut microbiome; combining 6.4TB whole-genome shotgun sequencing data from the MetaHIT consortium, the Human Microbiome Project (HMP) and a diabetes study on Chinese adults. The final high-quality  reference catalogue contained 9,879,896 non-redundant genes, and to aid the sharing of this massive dataset we hosted it openly in our GigaDB repository. With the aim of facilitating quantitative characterization of multi-omics data from the gut microbiome to understand its variation across populations in human health and disease, this data has been the most downloaded and popular dataset in our GigaDB repository. The tens of thousands of downloads hopefully demonstrating the utility and use of this dataset.

Following this approach research groups from the Institute of Metagenomics of BGI Research have continued this work in other model organisms, publishing and releasing via GigaDB the microbial gene catalogue of the mouse in 2015, the pig microbial catalogue in 2016, and just recently published the gene catalogue of the Sprague-Dawley rat gut metagenome in GigaScience. Our microbiome may seem complicated, but the 9.9M genes in the human gut microbiomes are outnumbered by the 13.8M genes in a the cow rumen, with data out in GigaDB earlier this year and a preprint describing this also out.

Monkey News
Latest to join this microbiome club is the monkey, with a publication just out in GigaScience describing the construction of the first Macaca fascicularis gut microbiome gene catalogue, and data again out in GigaDB. Macaca fascicularis, or the cynomolgus or crab-eating macaque, is a primate whose genetics and physiology are close to humans, making it an important model in biomedical research and drug development. However, detailed information of cynomolgus macaque gut microbiota had not been well developed.

Pigs and Mice and Monkey Microbiomes, Oh My! 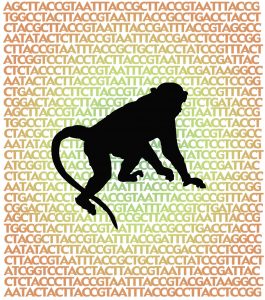 When we asked Xiaoping Li, head of this project at the Institute of Metagenomics, BGI-Research about why they set up these efforts in cataloguing the microbial world she said: “The established animal gut microbial gene catalogues (GMGCs) can increase our knowledge in the animal gut microbial composition and functionality. GMGCs could also serve a valuable reference and resource for researchers wishing to work with rat and monkey models in the biomedical field, as well as those in poultry industry who are interested in pigs and cows.”

With this menagerie of microbiomes already completed of where this area of research is going next, Xiaoing says: “The gut microbial gene catalogues of human will be further updated by including metagenomic data from different ethnic groups and also bacteria isolates from faecal samples. The GMGC of chicken, one of the most commonly consumed high-protein foods, is also in our plans.”

It feels appropriate seeing this pioneering microbiome data coming from macaques, as the genome of this species was amongst the first batch of genomes released in GigaDB, and was the first of our DOI’s to get cited in a scientific article in October 2011 (and covered in one of our first postings in GigaBlog then).

A catalogue of microbiome gene catalogues:

Li  et al. (2018): Supporting data for “A catalog of microbial genes from the bovine rumen reveals the determinants of herbivory” GigaScience Database. http://dx.doi.org/10.5524/100391