GigaScience reaches its first anniversary of publication, and achieves several milestones in changing how life science research is published 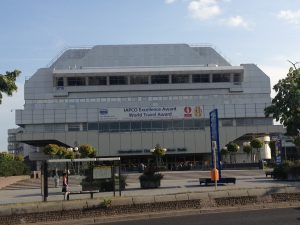 One year on from our launch, we are unveiling new features and functionality at the Intelligent Systems for Molecular Biology (ISMB) meeting at the ICC in Berlin (pictured) this week. As well as a print issue celebrating the best of the last year, we are announcing new features and tools, along with a new data analysis platform, GigaGalaxy. GigaGalaxy is an online platform that supports the reproducibility of data analyses. It provides a means to share computational tools and workflows that further document and reproduce data analyses reported in papers published in the journal. Through GigaGalaxy, GigaScience offers method publishing and sharing workflows and analyses in a transparent, executable manner: http://galaxy.cbiit.cuhk.edu.hk/

GigaDB is a repository to host data and tools associated primarily with articles in GigaScience. The database recently relaunched with a new look, new functionality, and updated browsing options. GigaDB also offers Aspera data transfer (see our recent posting on our Aspera functionality), which can be up to 100x faster than FTP, and a clear benefit for academics handling huge datasets. Through an association and associate membership with DataCite, datasets and methods in GigaDB will be assigned a DOI that can be used as a standard citation for future use of these data in other articles by the authors and other researchers. http://gigadb.org/

GigaDB has over 50 datasets, and more than 25TB of data, to date. Much of it unpublished data from the BGI. As well as extending to a broader range of fields producing mega-datasets such as proteomics and neuroimaging, the journal is able to track how datasets have been used. Many of the previously unpublished datasets released on the platform have been used by other projects, and this has not prevented publication of genome papers at a later date. The pigeon genome was released in July 2011, and with its main genome only published in Science in early 2013. Between these dates it has enabled other researchers to use it without restriction and publish work on the genes involved in pigeon milk. Several groups have also used released but unpublished polar bear genome data in comparative and population genetics studies for various bear species.

Executive Editor Scott Edmunds is on hand at the ISMB in Berlin for our birthday this week. You can talk to him at BioMed Central’s booth (#18) and also coordinating and speaking in a workshop on July 22, on ‘What Bioinformaticians need to know about digital publishing beyond the PDF’. This is our 3rd year at ISMB (see the write-ups from 2011 and 2012), so look out for forthcoming postings here in GigaBlog. You can also follow the tweets from #BOSC2013 and tomorrows #AFP13 SIG (of which we are publishing a series), and the main meeting from the #ISMBECCB hashtag.