Following FAIR principles is good for your colleagues, it’s good for the community, and it’s good for science. But what’s in it for the researcher, in return for committing to open science? A new commentary in GigaScience shows: A lot.

It’s easy to see how doing science in a FAIR (Findable, Accessible, Interoperable and Reproducible) way benefits the research community and society at large. From the perspective of a stressed-out researcher though, already pressured into doing more experiments and analyses than can be crammed into a working day, isn’t Open Science first and foremost an extra burden? Carefully keeping track of heaps of metadata, for example, doesn’t sound fun at all.

Javier Quilez et al., in a commentary published this week in GigaScience, make a strong case for the contrary: Yes, Open Science means following a set of principles. Yes, it means not taking shortcuts when it comes to documentation. And yes, there’s some bureaucracy and planning involved. What really counts, however, is that by following FAIR principles, labs are rewarded with research projects that run smoothly and efficiently – and, most of all, they are publishing results that are more reliable and reproducible.

A story of two samples

To prove their point, Quilez et al. tell a didactic story of two similar samples, generated by Pedro and Linda, respectively. Linda’s sample emerges from an open and FAIR pipeline,  Pedro’s however… not so. “The life of b1913e6c1_51720e9cf was simple and fruitful, while that of T47D_rep2 was full of accidents and sorrow”, as the authors write.

Trouble for T47D_rep2 starts brewing when the project changes hands, and a new member of the lab tried to make sense of it all. Wait, there are four files named 7D_rep2 in different directories? And where’s the code that was used to generate plots? That’s just the beginning of a series of headaches, and the project is descending into a nightmare.

Linda’s project, on the other hand, is progressing smoothly and quickly, even after it’s been taken over by a colleague. That’s because Linda and her colleagues filled in metadata in a dedicated form, used tools such as Jupyter notebooks  and followed FAIR principles. 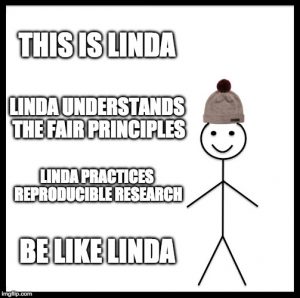 At GigaScience, our message to authors is: Be like Linda. Let’s commit to FAIR principles, together. We’re doing what we can to make it  easy for our authors. For example, we are collaborating with protocols.io and we are experimenting with Code Ocean, a cloud-based computational reproducibility platform. We also have an open repository, GigaDB, with  dedicated data curators who help GigaScience authors to organise and share their data – ensuring it is reusable. And in order to keep up with the rising number of submissions, we have recently increased our team of data curators.

From our beginnings five years ago (see our recent 5th birthday editorial), we were convinced that, without full data and reproducible workflows, research articles are not science – they are just advertisement for science. As participating authors in the original FAIR principles announcement it’s been amazing to see the FAIR concept spread across the world (including China, with Scott presenting on them at the Chinese Academy of Sciences open access week event last year)  and be taken up and promoted by governments and even the G20. Work is now underway on FAIR metrics to make the principles more usable and actionable, and on top of these efforts this informal and less abstract example will help make the case to researchers of their utility.

See you at FORCE2017 in Berlin next week?

As Quilez et al.’s story of two samples shows, clever tools and technology can help to advance Open Science, and GigaScience is keen to learn about and experiment with new ideas.

That’s why we are excited to attend next week’s FORCE2017 meeting in Berlin, to meet innovators in Research Communication and e-Scholarship. Many FAIR-topics are due be covered in what is the biennial gathering of most of the FAIR community. We are proud to be one of the sponsors of the event, and we have been actively participating since 2013, when it was still called “Beyond the PDF”. To get into FORCE mood, watch the talk our Executive Editor Scott Edmunds gave there in 2015: