Searching for the (Open) Source at Long Beach 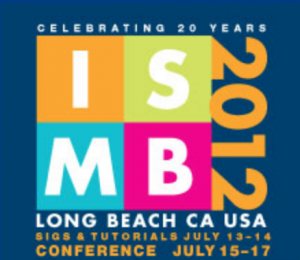 As a project with the aim of revolutionizing data dissemination and use, on top of promoting open-access and open-data, open-source is a key part of the open-science equation, and this week GigaScience has been at the Bioinformatics Open Source Conference (BOSC2012 – program here) in Long Beach. Sponsored by the Open Bioinformatics Foundation (O|B|F), BOSC is a satellite of the ISMB – the annual gathering of the worlds computational biology community, and the many pre-conference SIGs (Special Interest Group Sessions) are a good warm-up for the main event. Being GigaScience‘s second year at ISMB (see our previous report) it was a good opportunity to catch up with old friends and the check out the latest work in the field. Being in the week of our launch, it was also a good opportunity to celebrate and promote our first issue with our BioMed Central co-publishers and many of our editorial board.

Promoting openness in all its forms was the order of the day here, and open-access advocate (and now GigaScience author) Jonathan Eisen kicked off proceedings perfectly with a witty and touching keynote following his personal journey and conversion to open-science. Inspiring, and tackling many of the issues we are particularly interested in such as open-access and data-sharing, we were particularly excited to see him also raise the issue of data-citation. Pushing openness in general, practicing what he preaches his talk is of course already blogged and online, and all the related tweet chatter is archived here. Being a meeting of open-source fans we were an easy audience, but it was fun to see other similarly open-science themed talks such as Titus Brown‘s experiments with using iPython notebook as an interactive replication platform, and pre-publication review of his papers (check out his recent blog and his slides here for more). Alexandros Kanterakis also presented the PyPedia python crowdsourcing environment that has similar potential as a reviewing platform, although only for code. A further interesting example of an open testing and review platform was seen in Richard Holland’s presentation of the results of the “Pistoia alliance sequence squeeze” competition to spur development of open-source NGS data compression algorithms. Those involved used 1000 genomes public data and the Amazon cloud and AWS vouchers to review and test all entries in a reproducible environment, and entries were submitted in S3 buckets. Usefully, all source-code from the sequence squeeze competition entries is also publicly available from the competition homepage.

As with last year, workflow systems and played a big role at the BOSC2012 meeting. The global reach of this work was on display, such as BioUno – a Brazilian Jenkins-based platform presented by Bruno Kinishita, and Chipster – a Finnish workflow environment that originally was developed for microarray data presented by Aleksi Kallio. The well established platforms were obviously also present, with a number of talks on Kepler, Galaxy and Taverna. The Galaxy team was very well represented, with a project update from Dannon Baker, a visualization framework update from Jeremy Goecks, and insight into Galaxy’s integration with the Australian NeCTAR research cloud genomics virtual lab by Enis Afghan. A lot of really exciting work was on display with Taverna and myExperiment, particular as the meeting coincided with the announcement regarding their integration with Galaxy. Katy Wolstencroft presented a Taverna-based system in the cloud for diagnostic test results and attempts trying to scale and use this for clinicians. Taverna supremo (and new GigaScience editorial board member) Carole Goble did a fantastic keynote on building communities around open-source projects (slides here). Food for thought as we build up our database and data-platform, and hoping to use this Galaxy-myExperiment integration (see our editorial).

Other highlights of the session included GigaScience author and ISA-Tab collaborator Philippe Rocca-Serra talk on OntoMaton, a new ontology tagging and search tool for google spreadsheets. The meeting closed with a lively panel session, featuring BMC’s Iain H talking about reviewing standards for bioinformatics papers. Tackling reproducibility and the need for shared standards (with some nice anecdotes from Titus Brown that are covered here), there was also a lot of discussion regarding the need for more transparent peer-review, something we feel strongly with our policy of open (with opt-out) peer-review (see here).

For further coverage check out the notes of Brad Chapman. With the main meeting starting today, follow the action on twitter with the #ISMB hashtag, and those interested in talking to us about the journal and potential submissions please come and grab us on the BMC booth (#36).