See inside Obama in 3D? Yes We Can!

A new portrait of Obama shows a spineless, slimy, gutter dweller, and in GigaScience today we give you unprecedented insight into what makes them tick. Don’t worry, we haven’t encroached upon Fox News to provide partisan political commentary for the US elections, we are talking about the Obama genus of leaf-shaped Planerians from South America. So called because their name is formed in the extinct Brazilian Tupi language by a composition of the words oba (leaf) and ma (animal). Planarians are platyhelminth flatworms that live in leaf litter, hunting other creepy crawlies such as earthworms, snails, slugs, and insects. A new species, Obama otavioi Carbayo, has just been discovered in the Serra de Paranapiacaba nature reserve near Sao Paolo, but what makes this species description different from traditional characterizations was the data-driven, non-destructive approach to catalogue it. Morphological discrimination of these soft bodied, morphologically similar species, with asymmetric and difficult to interpret internal organs (particularly the reproductive ones), is challenging and laborious when depending on traditional techniques such as histological sectioning. Many species are poorly represented in museum collections, and destructive techniques such as these do not help in their preservation, or are compatible with modern molecular (DNA/RNA-based) techniques.

New non-destructive methods such as X-ray micro-computed tomography (μCT) can address a lot of these issues, and the high resolution 3D imaging data produced has already been shown to work well discriminating between soft bodied species such earthworms. Masses of data (in the region of gigabytes to tens of gigabytes per sample) is produced as a result, and until recently it has been difficult to share the resulting outputs. GigaScience and our GigaDB.org repository has provided a hopefully valuable service here, and we have already published a number of morphological microCT and MRI datasets from species as diverse as earthworms, sea urchins, centipedes and brittlestars. It is hoped data of this kind can kickstart comparative morphology beyond centuries-old descriptive practices to a 21st century data-driven discipline, and we are pleased to be able to help provide a forum and means for this.

The “cyber centipede” was our first example (in collaboration with Pensoft) of a ‘cybertype’ species description: a 3D computer image and swathe of data types to suit modern biology, including its gene catalogue, DNA barcodes, and video of the live animal in additional to the traditional morphological description. This new flatworm species also follows this approach to some extent, combing 2D and 3D μCT-based images stored in GigaDB, complementary histological sections which were combined and digitized into virtual slides, and molecular barcoding data to evaluate phylogenetic placement on the tree of life. The raw and derivative μCT data and virtual histological sections are described and published in a new Data Note in GigaScience by Fernando Carbayo and Jennifer Winifred Lenihan, and this has been published alongside validation and species description papers in Zoologica Scripta and Zool J Linn Soc. (still in press). The nearly half a terabyte of data is our largest imaging dataset so far, and was challenging to copy over from Brazil. This data is available for download for comparative morphology studies and beyond via our GigaDB repository, and we’ve also put together a video to give you a quick visual insight into what it is like inside of a flatworm.

Forward. Data we can believe in.
On top of spurring on the development of comparative morphology research, this high resolution data from the natural world is also popular with the wider community. Allowing armchair naturalists to inspect the wonders of life in unprecedented detail and three dimensions from their internet browsers is a powerful aid for teaching and citizen science. Our previous μCT Data Note showcasing scans of pregnant African brittle stars (see the Q&A in GigaBlog) has had over 6,000 views of the GigaTV video version driven from the feature in Gizmodo, and was also highlighted in The Atlantic. We hope this new Planarian data drives some interest to this underexplored corner of the tree of life normally obscured and hiding under the leaf litter. 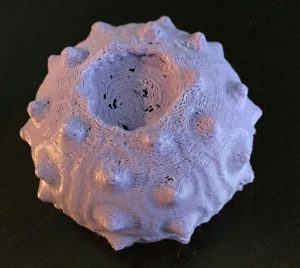 On top of just browsing, some enterprising citizens are also building upon this data. With the ability to render and manipulate these 3D imaging datasets, we’ve now got lovely examples of our 3D sea urchins and earthworms printed out via 3D printer. We’ve also been experimenting with volumetric printing of some of the more complicated specimens, and plan to make the 3D printer files available on GigaDB when they are high enough quality. The earthworm data we published in a co-ordinated manner with a PLOS One paper, beautifully rendered the internal structures and systems, and provides fantastic teaching aids for future comparative taxonomists and anatomists. The increasing pace of species extinction, coupled with the decreasing pool of taxonomic expertise, means that there is an urgent need to speed up the process of investigating biodiversity. This data driven approach in study, training and outreach in taxonomy we can assist somewhat in this ongoing challenge.

Executive Editor of GigaScience, and data nerd working at the BGI and based in Hong Kong. Open Knowledge Open Science Ambassador and Executive Committee member for Open Data Hong Kong.