ShoRtcut from bioRxiv to GigaScience 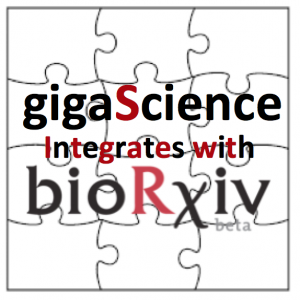 Authors can now submit their bioRxiv preprints directly to GigaScience via the biorXiv platform, at the push of a button. This handy technical integration is another hallmark of biology preprints becoming a normal, accepted, and speedy way of communicating research results.

Pre-prints, versions of a scholarly paper that precede formal publication in a peer-reviewed journal are  becoming increasingly mainstream. While the physics community were the trailblazers of this faster way of doing science, having since 1991 made the use of the arXiv repository the norm for much of the field,  most other fields of research have been much slower to get the memo. arXiv started taking quantitative biology submissions in 2003, but the rest of the biology only caught up a decade later with the launch by Cold Spring Harbour Laboratory of the bioRxiv pre-print repository. While there has been some push-back by some of the more old-school publishers (Cell Press being a notable example), the majority of journals now accept this is increasingly becoming the norm in publishing. Science proceeds more rapidly as a result, and from a purely selfish perspective the physicists have noted the boost in early citations as a result. Things have snowballed in the last 12 months, and remaining contrarian journals rejecting this citation boost are being dragged kicking and screaming into this brave new pre-print world by research funders getting on board. With many now accepting preprints in grant applications, and a coalition of the big biomedical funding bodies in the US and UK proposing a central site for life-sciences preprints.

From the first days of launching GigaScience, we emphasized that we do not see preprints as a “prior publication” that would preclude submission to us. With our open-science ethos, we stated in our editorial policies from the beginning that posting a preprint will in no way be held against our authors. On the contrary, our editorial team have always been keen to scout bioRxiv for papers that fall into our scope of “Big Data” science. And since bioRxiv launched in November 2013, our Editor, Nicole, has been regularly inviting authors of appropriate-looking preprints to submit to the journal, and to make their data available via our data repository, GigaDB. Impressively, 19.5% of our published content have pre-print versions in bioRxiv, and thanks to the increasing uptake of pre-prints, our integration and the many papers we currently have in review, we expect this number will likely increase further. There has been debate on whether pre-prints should allow researchers to “claim priority” and if it puts users at the risk of scooping. To encourage their use we make this clear in our editorial guidelines, encouraging their citation, and extending scooping projection to pre-prints stating in our editorial policies and reporting standards page:

“We encourage the citation of preprints where appropriate in the reference list, and will not consider them in the evaluation of the conceptual advance of a manuscript submitted for publication.”

20% of GigaScience articles have a bioRxiv version 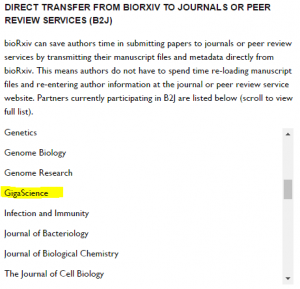 Our most recent manuscript published, commissioned via bioRxiv, is a Technical Note on Enhancing Knowledge Discovery from Cancer Genomics Data with Galaxy.

Many of the faster moving research communities have taken to pre-prints quicker, and on top of Oxford nanopore users, the Galaxy workflow management system community have been early adopters. Many other papers we published in our Galaxy series first saw the light of day as preprints – see another example here (biorXiv version) and here (published GigaScience version of the same paper). As the examples show, when a preprint is published in GigaScience, the bioRxiv version is soon updated with a link to the published version, making it clear to readers at bioRxiv that the papers are in fact pre- and post-“print” versions of the same research (although the terminology is confusing of course. Neither of the two versions is literally printed in a journal).

The new integrated functionality, allowing authors to hand over manuscript files and metadata such as author information, will make it easier than ever for bioRxiv users to submit to us. We look forward to the first submissions via this new, direct route. For more information see their submission page.

Depositing pre-prints not only speeds up sharing of results with the scientific community, it may also transform the traditional relationship between authors and journals. Rather than authors having to subject their paper to the scrutiny of one journal editor at a time, with the coming of age of pre-preprints it may become more common that editors have to compete for the best preprints, simultaneously, while the authors can sit back and choose a journal where they wish to have their work peer reviewed.

We are not afraid of the new competitive ways of the preprint world, because we offer a lot of added value for our authors and readers: Unlike other journals, we add much more than a”badge of approval”, in the form of assurance that the paper has been properly peer reviewed, somehow, by some anonymous expert. At Gigascience, peer review is open, that is, we publish (via citable DOIs) the signed reports of our reviewers, giving all readers access to the expert assessments that led to the published version of the paper – which is always open access, CC-BY, of course. 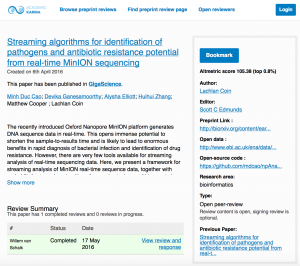 Interested readers can also add comments to a pre-print. This form of open pre-publication review allows authors to ‘tweak’ their manuscripts before formally submitting to a journal, and it aligns well with our own transparent open peer review format. New platforms for peer-review have been built upon this ocean of open access preprint content, and we’ve been working with the AcademicKarma peer-review network and to see how we can integrate our publication pipelines with theirs to further speed up and streamline research. As AcademicKarma uses open peer reviews compatible with ours, we’ve been able to properly assess and utilise reviews that we find of suitable standard, streamlining the normally tortuous publication process greatly. See our first examples of transferred pre-print peer-reviews (via DOIs here and here) attached to this paper on streaming algorithms for real-time MinION™ sequencing.

With these new abilities to comment and review pre- and post- print versions of papers, who owns copyright of peer-reviews is a grey area that is causing confusion among some. AcademicKarma has tried to assist and broker anonymous review by producing an open science agreement form for reviewers. Being clear and open from the beginning that all our content, including peer-reviews, is open, transparent, and under CC-BY licensing prevents confusion and miscommunication in this brave new world (see our blog on this). How all these online interactions around work hosted in pre-print servers interact with traditional publishing conventions that normally ask for strict confidentiality during the review process is also a grey area that needs to be updated for the 21st century. With our “open everything” ethos, we embrace this opportunity to drag publishing forward, and assume that if authors have publicly posted their work in a pre-print server then they consent to open discussion of their work.

We saw a great example of this with our Assemblathon2 paper, the real-time blogging of the reviews lead to huge amounts of additional discussion, feedback and scrutiny that improved the paper, and also greatly increased the visibility of the work (definitely contributing to the altmetric score of 155 and nearly three hundred citations to date). Being available in arXiv meant that all parties consented to this open discussion, and on top of the back and forth discussion on social media and comments section of the blog, over 20 articles and blogs covered the article. You can see more on this process of “meta peer-review” in this video interview with our EiC Laurie for the (now sadly defunct) Biome magazine.

In addition, to further ensure full transparency and reproducibility, our data curators invest a lot of effort to make sure that all data, code, and any other supporting material is published alongside the paper. We maintain a dedicated open repository, GigaDB, to host curated, citable datasets that are linked to the articles we publish.

Thus, if preprint authors ask what GigaScience  has on offer, on top of hosting a peer-reviewed “formal version” of their paper, we’d like to highlight first of all our commitment to open data and open reviews.

Preprints have come a long way in biology, and at some point it looked as if biologists were just not into them at all, unlike their neighbours in the physics lab. However, in 2017 all signs are indicating that biology preprints are finally here to stay. Submissions to all pre-print servers are increasing steadily and ever more journals and editors are coming on board, seeing preprints as a legitimate way of communicating results. We welcome this revolution wholeheartedly.