Continuing our #usegalaxy series at the 2014 Galaxy Community Conference

The upcoming 2014 Galaxy Community Conference (GCC2014) has just opened early registration, and following from our series announced at the last meeting we are renewing our call for papers for our special thematic focused series on studies utilizing large-scale datasets and workflows. For those not part of their large and rapidly growing user base, Galaxy is an open, web-based platform for data […]

Push the button! GigaScience moves toward more interactive articles Research articles are being published with increasingly large and complicated supporting datasets, together with the software code used in analyses of the data. However, there is a growing number of studies reporting the inability to reproduce previously published findings which may, at least in part, be […] 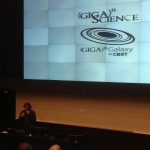 Galaxy shines in the land of the midnight sun Immediately after beer, mussels and genomics at ICG-Europe in Ghent (see BGI’s write-up of the event), last week was a blur of eye-wateringly expensive alcohol, brown cheese and reproducible research at the Galaxy Community Conference in Oslo. Now in its 4th year, and the second year […]