Pregnant Starfish go Big Data.
Brittle stars are a class of organisms that are closely related to starfish. While most members of this group reproduce externally, there are some species that develop their young internally and ‘give birth’ to live young. While sonograms are the means by which humans can get a look at their developing offspring, live-bearing brittle stars have not been so lucky, as researchers primary means to investigate the brooding chambers and juveniles of brittle stars has been via dissection. This technique destroys the sample, thus eliminating the possibility of further study and sharing of samples for others to use. In new work published in GigaScience (supporting a coordinated publication in the Afr J Mar Sci), by using microCT scanning the authors were able to visualize in 3D the brooding chambers and juveniles inside the brittle star, providing an in situ view of the developing young and the position of the bursae inside the adult. The data (all hosted in our GigaDB repository) includes videos and projection, reconstruction images and an additional volume file for easy viewing. 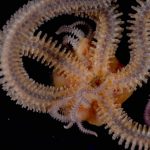 Large-data sharing is an essential part of making research both reproducible and reusable in the broadest sense. Following our “cyber centipede”, scanned Earthworms, and MRI’s of sea urchins, this is our biggest imaging dataset to date, and further demonstrates the field of morphology is becoming a “big data” field. Following previous author Q&A’s in GigaBlog, here we ask first author Jannes Landschoff for some insight into why he shared his data via us.

Can you say a little bit about yourself and the Department of Biological Sciences and Marine Research Institute at UCT?

I am currently a PhD student at the University of Cape Town and after my Masters project on brittle stars I have now moved on to a biodiversity project on hermit crabs. Born close to the coast in Northern Germany, marine life has always fascinated me. This was the reason for moving to Cape Town, where a lot of the marine life, especially marine invertebrates, are very much unexplored, and where there is still a lot to discover.

The University of Cape Town is historically strong in marine research and I am grateful for my training in the Ma-Re Institute, which functions as a link between the Biological Sciences and Oceanography. For me as a young researcher with a large interest in marine biodiversity, living and working in a country like South Africa and studying at UCT is a privilege.

What attracted you to work on brittle stars and their reproduction in particular?

My work on brittle stars started by a coincidence and initially we wanted to study something completely different. A recreational diver had sent us pictures of a potential pseudocopulation of two adult brittle stars. Those pictures of brittle stars mating attracted our interest, in particular because it seemed as if there was a connection, like a penis structure between them. The literature and all the experts we consulted said that this was nonsense, and we pretty soon realised they were right. 😀 However, by then we had already come up with more ideas (including the scans), so I stayed with the group for my masters project and studied the unusual reproduction of a large brooding brittle star. At that time, nothing was known about that species although it is very common at our coasts.

Why did you decided to study this organism using micro computed tomography, and what were you hoping to find using it?

Our goal was to visualise the very large brooded juveniles inside the adults without disturbing the surrounding tissues. At first, we purely wanted to show the feasibility, but we soon realised how amazing the three-dimensional visualisations looked and that our rotation movies attracted much interest.

What do you hope others will do this data, and where do you think the field of morphology is going now we have these techniques?

Because our focus lay on the brooded juveniles, I believe that our data have more information than we actually used for our studies. Those information include the entire morphology of the brittle stars, which we did not analyse at all. I think that in future, most morphological studies on marine invertebrate will make use of non-destructive scanning techniques. Apart from that, I would like to see other studies similar to ours using the scan data for comparison.

What do you think is the biggest hurdle for scientists in using these kinds of advanced imaging techniques? Why have so few echinoderm species been studied this way so far?

I think the main constraint of these techniques is not the scanning itself, but the analysis of the scans which can take a long time and require a profound knowledge of the analysis computer programs as well as the right hardware. The scans can be large and require a lot of computing power as well. In our case, we analysed the data manually, this meant a long time sitting in front of the PC going through thousands of image stacks and manually separating the juveniles from the adult tissue. I was only able to do that because it was my masters thesis and I had enough time. For studies with a bigger sample size, automated analyses are needed. Automated processes already exist, but applying these in practice can often result in different quality for different species and samples.

Working in South Africa and off the grid of a lot of the fast international research networks, have there been any challenges in working with and trying to disseminate a dataset such as this that is in the 100GB range? As this type of data sharing isn’t currently mandatory what drove you to go to the effort?

Working in a country like South Africa, we are used to problems that many people in the western world may hardly ever think of. For example, uploading a dataset of 100GB takes a long time, especially with slow internet connections. When the upload is hit by a sudden power outage, it might happen that you have to start the upload again. In fact, it took us several months to submit the data! I still think it is worth it because it sharing the data makes my research more transparent and more accessible.

Now you have managed to visualise and compare brooding at this level in the species, what is next for your research in this area? Are you working on any other species in the same manner?

As I have mentioned above I have now moved on to crustacean research, but scanning techniques can be equally valuable in crustacean biology. Although I am not planning any scanning of crustaceans right now, I am grateful to have the skills and facilities to do that sort of work.

Apart from my PhD project, we are still working on a few other brooding species of echinoderms. As those project can teach you a lot about internal anatomy, are hands on, and result in fascinating images, they make great study opportunities for undergrad students. Next year, we will be publishing another reproduction study on a coastal brittle star, Amphiura capensis, of which one scan is already included in the published data set.