Toads and toxins: The genome of the invasive cane toad 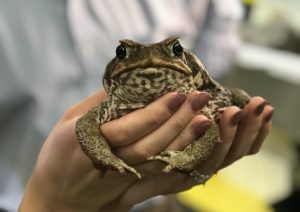 The cane toad Rhinella marina is native to Central and South America. But thanks to humans and the sugar cane trade, the species now thrives also in Australia and other places where it doesn’t belong. The invasive species comes with an unpleasant surprise for native Australian predators, such as snakes or freshwater crocodiles: R. marina kills them with its toxic secretions.

GigaScience has good news for fighters against the unwanted guest, and also for the scientific quest to understand the fascinating biology of the toad’s toxins. Genome scientists assembled a high quality genome draft of the species (GigaScience article here, open data here). The effort was led by Peter White and his group at  the University of New South Wales , with support from colleagues from Brazil and Portugal.

The new Data Note is another example for the superior assembly quality that can be achieved by enhancing (now) “traditional” next generation sequencing data with a healthy dose of long reads. More broadly, the new data from the cane toad is also a much needed addition for the wider vertebrate genomics community. Due to their size and complexity, high quality amphibians have been the sparsest member of the vertebrate genome club, the Axolotl being the only other recent example of an amphibian VIP species with a high quality genome assembled using PacBio long reads. With these challenges in assembling whole genomes the research community have had to make do with transcriptome gene catalogues, and we previously published cane toad transcriptomes from some of the same authors.

Help in systematically filling these data gaps is on the way, and our Editor in Chief Laurie was at the Genome10K conference last week, where there were announcements from the Vertebrate Genomes Project (VGP) to do exactly that. The VGP aims to generate near error-free reference genome assemblies of all 66,000 extant vertebrate species, and in the first phase release a high quality genome from the two-lined caecilian, Rhinatrema bivittatum, has been included among the first 15 genomes. As with its success as an invasive species, the cane toad is likely to be a pioneer of the rush of amphibian genomes to come.

Three members of the Australian team, Peter White, Alice Russo and Rick Shine,  just published an article in the online magazine “The Conversation” about their work with the cane toad. Please read the full story over there. Surely there is no better summary of the work than in the authors’ own words! (And if you wish to re-publish their story, you can go ahead – it’s posted under a creative commons (CC-BY) licence.)

Just as a teaser, some quotes from the article illustrate the struggle to complete the project:

“Previous attempts to sequence the cane toad, by WA researchers more than 10 years ago, were not successful, largely because the existing technology could not assemble the genetic pieces to create a genome. But thanks to new methods, we have succeeded in piecing together the entire genetic sequence. [..]

Sequencing, assembling and annotating a genome (working out which genes go where) is a complicated process. The cane toad genome is similar in size to that of humans, at roughly 3 billion DNA “letters”. By using cutting-edge technology, our team sequenced more than 360 billion letters of cane toad DNA code, and then assembled these overlapping pieces to produce one of the best-quality amphibian genomes to date. [..]

We deduced more than 90% of the cane toad’s genes using technology that can sequence very long pieces of DNA. This made the task of putting together the genome jigsaw much easier.”

The authors and UNSW also produced a beautiful video. Watch here to see not only the cane toad, but also sequencing gear in action:

“We’ve cracked the cane toad genome, and that could help put the brakes on its invasion”. (The Conversation, CC-BY)