Tegu: the most complete assembly of any reptile genome

Today in GigaScience  we present the genome of the tegu lizard. It is the most complete assembly of any reptile genome so far and will also aid scientists to study other lizards and snakes. 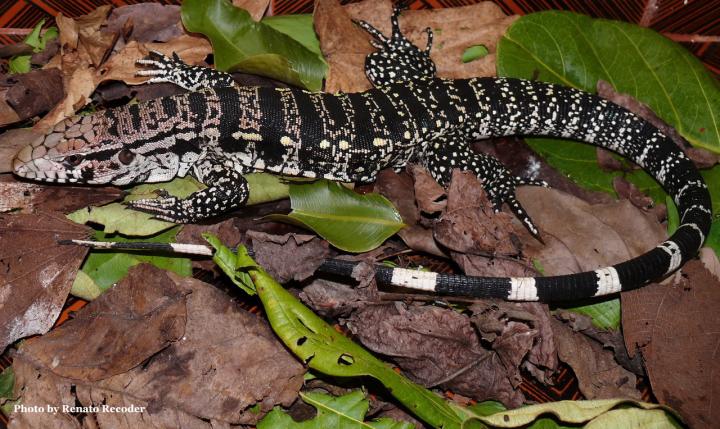 The tegu has mastered a trick that is highly unusual in the reptile world: it can turn on its own heating system. Most reptiles are not able to control their body temperature like mammals do and instead must rely on its environment, such as available sun and shade, to attain an optimal body temperature. The tegu, Salvator merianae, however, has taken a step towards being full-blown warm-blooded. It can raise its own body temperature by up to 10°C above its surroundings.

This is just one of the reasons that made the tegu a worthwhile target for a major sequencing effort. The tegu is an exotic pet beloved my many and, unfortunately, also an invasive species in some areas. Read more in the press release and in the GigaScience article (data here).

The new genome assembly is provided  by a team of researchers led by Michael Hiller at the Max Planck Institute for Molecular Cell Biology and Genetics in Dresden (Germany). Here,  in an “Author Q&A”, two of the papers’ authors, Juliana Roscito and Michael Hiller, expand a bit on the background of the project.

Q: What is special about the tegu? Why did you choose this species for your sequencing project?

A: We were interested in studying limb loss in snakes and other reptiles. Since limbless reptiles had ancestors with fully developed limb, we needed a well-assembled genome of a lizard with fully developed limbs as a reference. We chose to sequence the tegu lizard since it is a very common species, found in many different environments, from forested to open vegetation areas. Apart from that the tegu is an opportunistic species that easily adapts to different environments, where it can often pose threats to endangered species. Also, the tegu lizard has a growing economic importance in South America for its meat and leather.

Q: Compared to other reptile genomes, the tegu’s genome assembly has very few gaps. What was the key for this success?

A: Similar to other reptiles, a large portion of the tegu genomes consists of repetitive sequences, which occur many times in the genome. Repeats are a main problem when assembling a genome, especially when repeats are longer than the length of the sequenced DNA fragments, which results in gaps (breaks) in the assembly. Therefore, we initially decided to produce Illumina MiSeq paired-end reads with a length of 300 bp, which is the longest read length available with this platform. Furthermore, we generated long PacBio reads that are typically several thousand bp long, which greatly helped to close assembly gaps and thus improve completeness and contiguity.

Q: Any particular challenges you had to overcome for this project?

A: We had to integrate different sequencing and scaffold technologies, which turned out to be difficult since existing tools often don’t work as expected, especially if the input data differs from what the tool was initially developed for. It took numerous rounds of trial and error to find a combination of tools that substantially improved the existing short-read based genome assembly using long-read sequencing data. This certainly also highlights the need for robust tools to improve assemblies with long-read data.

Q: How will the new data help scientists to study other reptiles?

A: We are very happy to contribute to genomics resources available to the community, in particular because reptiles are heavily under-represented among the vertebrates with sequenced genomes. Apart from generating an improved assembly with high completeness and contiguity, we also provide a whole-genome alignment between the tegu and 16 other species, and a set of conserved non-coding genomic elements that likely have gene-regulatory functions. We hope that these resources facilitate comparative reptile genomics to understand how unique morphological features evolved in this group of species and how vertebrate genomes evolve in general.