And the winner is? Our #ICG12 prize track on GigaTV

Last month was the 7th consecutive year we’ve attended our co-publisher BGI’s annual ICG (International Conference on Genomics) gathering in Shenzhen. While we’ve assisted in organising a number of fun thematic tracks over the years including ICG-8’s crowdsourcing, crowdfunding and open science session, and ICG-10’s community genomics session, for ICG12 this year we decided to go one step further and organise our first ever competition and prize track. With the aim to promote submission of new, cutting edge research in to the conference and journal we were very happy with the papers we received. Covering GigaScience‘s scope, submissions were split 50/50 between new genome description articles and more methodological work covering genomics, epigenomics, proteomics and phenomics. Review and judging was carried out in our typically open science way showcasing the latest real-time and open peer review methods. Submissions had to come in via our bioRxiv integration and the review process could be followed and contributed to openly via the academicKarma platform (feel free to view the reviews of accepted, rejected and still underway submissions here). After passing peer review they are then published in a special series page in the journal.

Everyone’s a winner…
The top six submissions were given the opportunity to present their work in our special session at ICG12, and were given free registration, accommodation and travel to come out to the spectacular China National Genebank building in the southern Chinese countryside. Our excellent judging panel (including Huanming Yang, Laurie Goodman, Lachlan Coin, Paul Horton, and Kathy Belov) ranked the submissions and we announced the overall winner at the ICG conference banquet after the session. If you’d like to see who won the grand prize of $1000 as well as a free article processing charge (the runner up also received a full waiver, with the other winners getting 50-75% discounts on top of their travel expenses) see below. The talks were filmed and now after a bit of editing we have them online on our GigaTV youtube channel, and we have posted them all here for your future viewing pleasure. For viewers behind the Chinese great firewall we are also posting them in our youku channel.

Taras Oleksyk (University of Puerto Rico at Mayagüez) on Solendon genomes.
The second time Taras has made it to one of our ICG sessions (see his older slides from the ICG8 open science track), this time he wasn’t presenting on parrots and rather on other stranger Caribbean animals. This work highlighted his innovative genome assembly strategy to help understanding of evolution and conservation genetics of the critically endangered Solenodon paradoxus from the island of Hispaniola. The challenging nocturnal sampling of these venomous mammals already highlighted by IFS, and you can see his slides and the published version.

Daniela Puiu (Johns Hopkins University) on the enormous wheat genome.
Daniela presented on the Salzberg labs ambitious first near-complete assembly of the hexaploid bread wheat genome. Highlighted in Nature as one of the most complicated genomes ever read, using 880,000 hours of processor time on a cluster of parallel computers resulted in nearly continuous chromosome sequences that encompassed 15.3 billion letters of the wheat genome. See her slides and published paper here.

Zhipeng Li (Chinese Academy of Agricultural Sciences) on the reindeer genome
Getting to the end of the year it felt seasonally appropriate to see Zhipeng’s work on the reindeer (Rangifer tarandus) genome. The seasonal topicality of it also picked up by a number of media outlets such as GenomeWeb and The International Business Times. You can read the published research and see his slides.

Jie Zheng (Bristol University) on the PhenoSpD integrated Phenomics toolkit
The final talk in the session was from Jie Zheng on PhenoSpD, an integrated toolkit for phenotypic correlation estimation and multiple testing correction using GWAS summary statistics. You can see the slides and published version of the work here.

…but there can be only one.
Following the prize track at the conference banquet judges Laurie Goodman and Kathy Belov presented trophies to all the winners, but only one could take home the giant cheque, trophy and grand prize of $1000. All of the shortlisted papers were fantastic and worthy winners, but judges selected Taras Oleksyk and the Solenodon paradoxus genome (pictured collecting his trophy).

And the winner is…@DrTarasOleksyk! Awarding prizes for our 1st competition & #ICG12 track. Thanks participants for the amazing submissions pic.twitter.com/3g5QtHjs1q

Being based in Puerto Rico, Hurricane Maria had closed down his lab and cut off electricity in his town, so Taras was very lucky to make it off the island in time for the conference in Shenzhen. The students who carried out this work did not have the privilege of escaping with him, and with much of the lab destroyed (particularly all the frozen samples), at the time of the conference many of them were unsure as to whether their classes and research projects would continue. The prize money was a drop in the ocean compared to the damage that still needs to be repaired, but at the conference Taras generously announced that the money would be donated to the students who did most of the work in the project and needed the money the most. You can see our pictures of the conference on our facebook page, and watch the 20 minute talks in your own time, as well as the videos from our ICG10 talks. 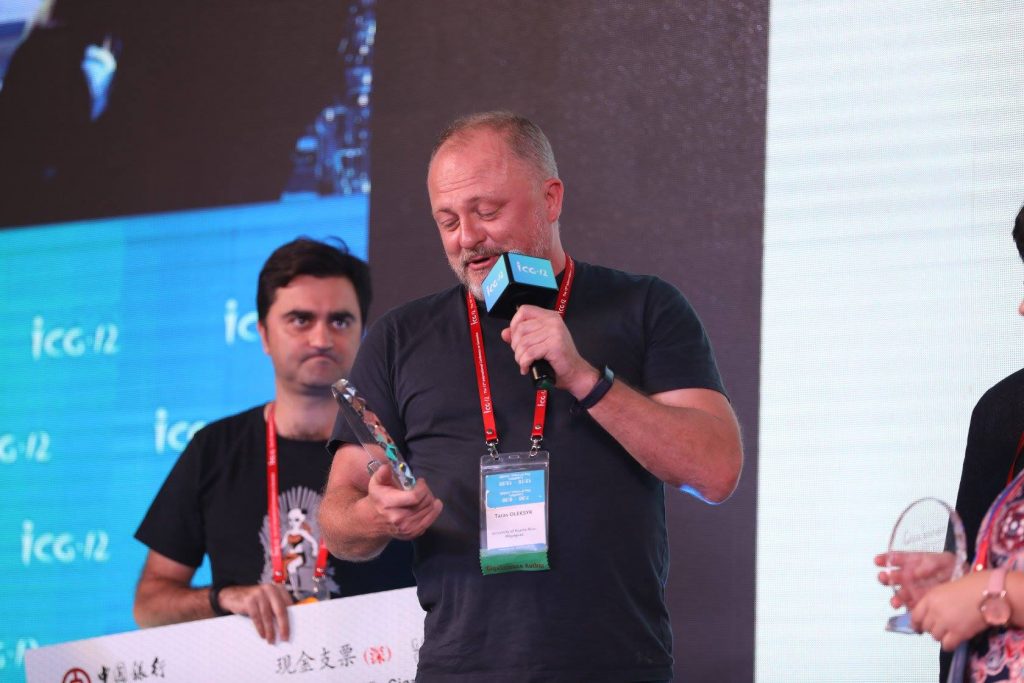 We and all the participants were very happy with how the prize track went, so we will definitely be repeating the process again next year. Watch this space for announcements when that will be, and we hope to see many of you at ICG13 for our next prize track.

UPDATE 21/5/2019: We have updated this post to include the published versions of all of the ICG12 prize papers, and if you want to see the 2018 prize track winners see the GigaBlog post here.