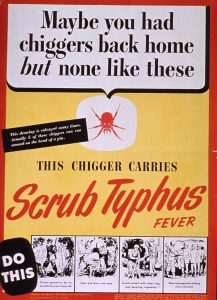 In GigaScience, Benjamin Makepiece and his co-authors from Liverpool present genome assemblies of two trombidid mite species, the itch-inducing chigger mite and its more benign cousin, the velvet mite.  The bite of the chigger mite can transmit a life-threatening bacterial disease, scrub typhus.

When the authors explored the gene content of the mites’ genomes, searching clues for new ways to control the chigger mite, they came across a couple of surprises. Interestingly, they found evidence for ancient lateral gene transfer from bacteria or fungi. Perhaps most unexpectedly, they found functional genes for producing terpenes, which are only rarely found in animals.  The authors explain the significance of their finding in a press release:

“The terpene finding is particularly exciting for the infectious disease researchers as it could lead to new ways of controlling the chigger mite, the bite of which is not only intensely irritating (a condition known as ‘scrub itch’), but can transmit the life-threatening bacterial disease scrub typhus.

Scrub typhus is prevalent across the Asia-Pacific region, affecting around one million people each year and killing 5-10% of those not treated promptly with antibiotics. The disease, which is spread through the bites of infected larval chigger mites, came to wider attention during World War II after afflicting soldiers operating in the South-West Pacific region.

Lead researcher Dr Benjamin Makepeace, from the University’s Institute of Infection and Global Health, said: ‘Our team was startled by the remarkable finding that trombidid mites have a metabolic capability normally only seen in plants, fungi and bacteria. There is currently no effective vector control for chiggers, but it is hoped that in the future, terpene extracts could be used to attract chiggers into insecticide-laced traps.’ “

Our readers may also remember that lateral gene transfer in mites has been shown before in another GigaScience paper (Dong et al,.), also co-authored by the mite experts from Liverpool (and see this previous Author Q&A with Tatsuhiko Kadowaki for more).