The current global panic about Zika is a “data gap” issue: a vacuum of information due to gaps in understanding of its spread and pathogenesis, and gaps in sharing the research data and specimens that will enable the global research community to keep one step ahead of the disease spread. As with Ebola, there has been frustration at many key players not sharing these materials, but a number of the major health bodies, funders and publishers (including our co-publishers at SpringerNature) have signed a consensus statement on timely and transparent pre-publication sharing of data and results. Journal signatories make a commitment that all content concerning the Zika virus free to access, and data and preprints deposited ahead of submission of any paper will not pre-empt its publication in these journals, although there has already been complaints regarding appropriate credit not being provided. We at GigaScience already have stringent open and transparent data, review and publication policies in place, and would encourage submission of Data Notes and Technical Notes (methodological and software papers) to enable due credit to producers of data and tools. As with our dissemination of the data from the deadly German 2011 E. coli outbreak, curation and dissemination will be rapid, and we will also offer waivers of our article and data processing charges for Zika studies to encourage this. Please contact us if you have presubmission enquiries or questions. If you are in Hong Kong please come along to the Zika Hackathon that some of the GigaScience team are helping organize on the 16th February at MakerBay. 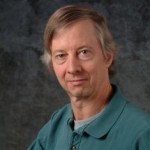 Trying to fill some of these gaps, and following similar blogs on the Ebola epidemic, we present another data oriented guest post from Michael Dean from the Center of Cancer Research at the NIH who has pooled together various available data to present a non-specialist view of the Zika crisis. [Note: the material presented here is from Michael Dean’s own perspective and does not represent the viewpoint of the NIH, or NCI.]

From Ebola to Zika
Just as the countries of West Africa were achieving elimination of the Ebola pandemic, the Americas were experiencing the rise of a pandemic of Zika virus. Zika (ZIKV) is a flavivirus related to viruses causing dengue (DENV), chikungunya (CHIKV) and yellow fever (YFV) and West Nile disease (WNV). ZIKV was discovered by A.J. Haddow in the Zika forest of Uganda in 1947.1 ZIKV is known to cause fever, rash, headache, and recently neurological symptoms. Campos et al. reported on 7 confirmed cases of ZIKV infection in samples collected on March 26, 2015 in Bahia, Brazil.2 The isolates were most related to Asian strains that have been circulating in the Polynesian Islands since 2013.3-5 By November, 2015 ZIKV transmission was reported across 18 of the 27 Brazilian states, and in October confirmed in Venezuela. To date within-country transmission has been reported in 26 American nations (Table 1, Figure 1).

Table 1. Countries in the Americas with confirmed in-country (autochthonous) transmission. 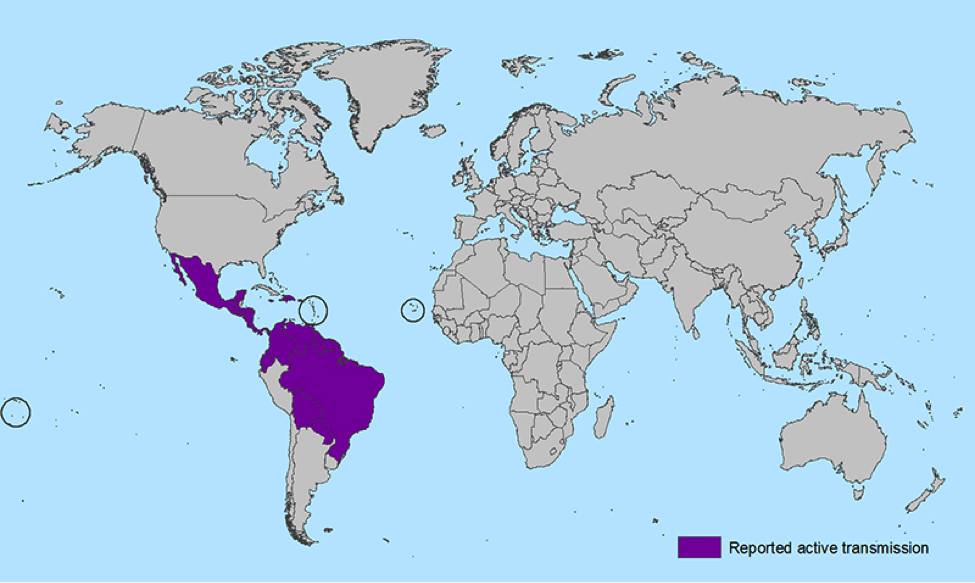 ZIKV and Microcephaly
Troubling reports from midwives of an increased incidence of microcephaly in newborns began emerging in Brazil in late 2015, and in November the Ministry of Health reported a 20-fold incidence in microcephaly in states of Brazil with high infection rates. Brazil called a state of emergency in public health and required the reporting of all cases. By January 2016, 4074 confirmed or under investigation cases have been reported and 88% of cases are in the Northeast region of the country, where the ZIKV infection is the highest (Table 2, Figure 2). ZIKV infection results are only confirmed for 41 of these children to date, 40 in the Northeast region. 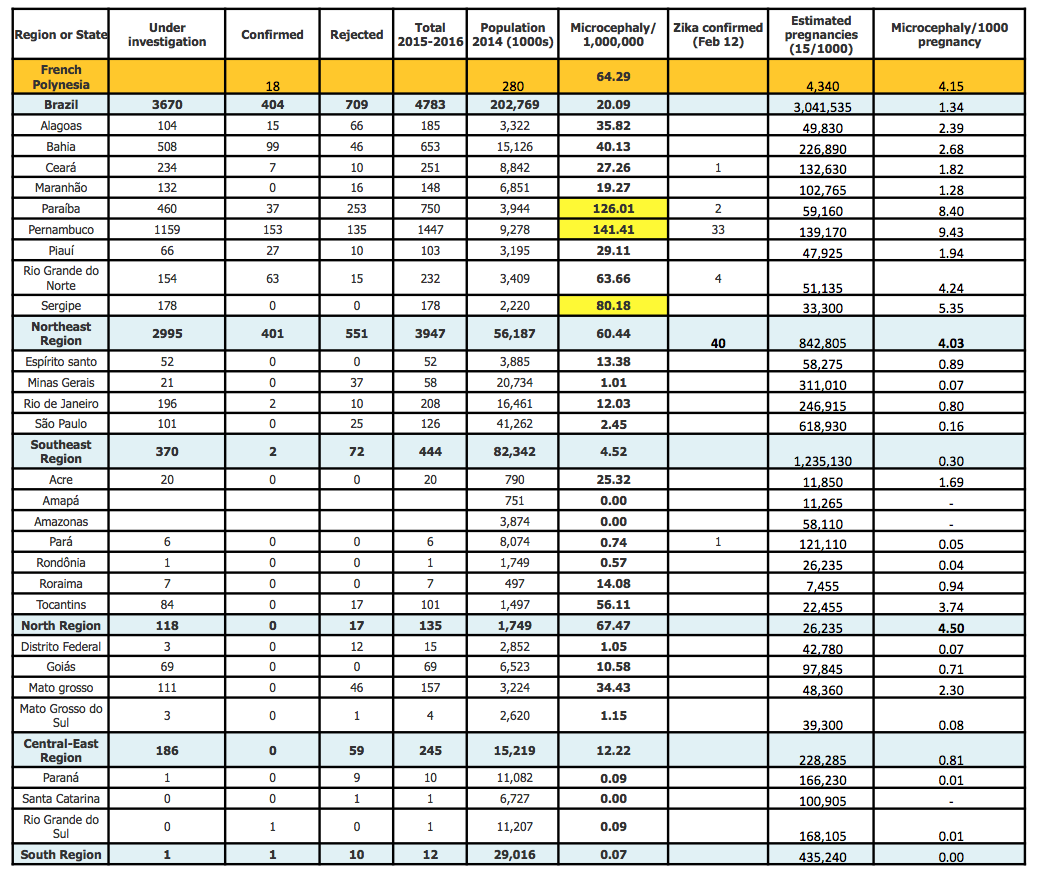 Table 2. Cases of microcephaly and/or malformation suggestive of congenital infection in Brazil. 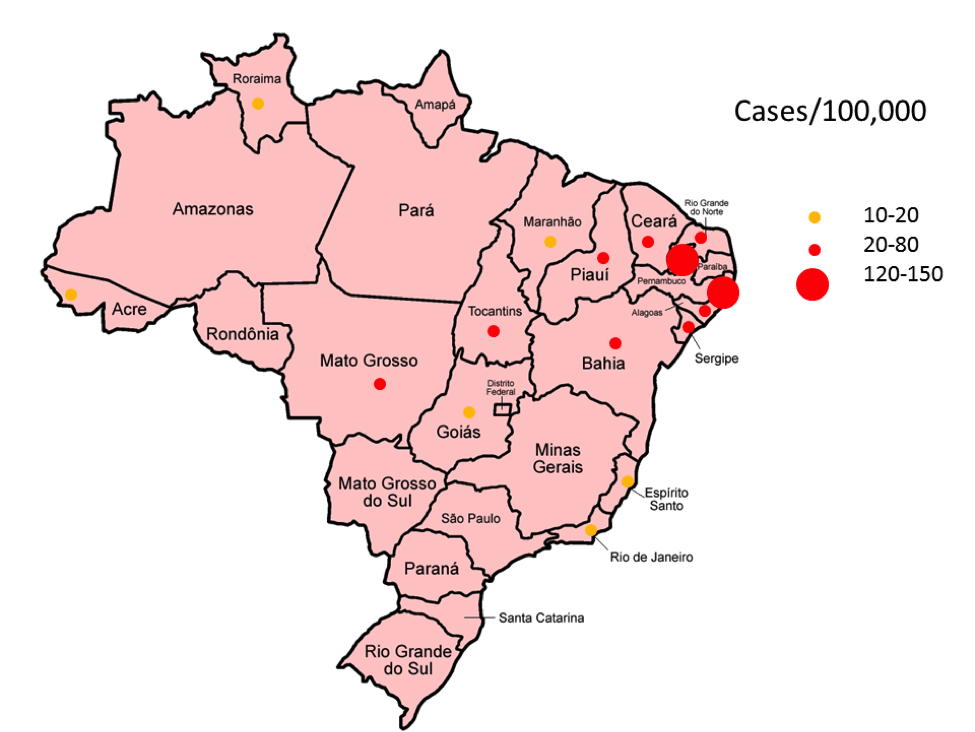 Figure 2. Map of Brazil with confirmed and under-investigation cases of microcephaly/100,000. Difference in rate between NE Brazil and the rest of the country X2=5980, P~0. Source: data adapted from http://portalsaude.saude.gov.br/index.php/cidadao/principal/agencia-saude/22145-ministerio-da-saude-investiga-3-852-casos-suspeitos-de-microcefalia-no-pais

Ultrasound data from two ZIKV positive microcephaly cases from Brazil has been published.6 The blood of these women was not positive for Zika, but their amniotic fluid was, documenting perinatal transmission, and illustrating future challenges in studying the infection. These two cases were examined at 29 and 30 weeks of gestation and were 2.6 and 3.1 SD below normal head circumference. The second displayed marked brain developmental abnormalities as well as small size. A report on 35 infants with microcephaly born in ZIKV prevalent areas showed 25(75%) had severe microcephaly, defined as >3 standard deviations (SD) below age and gender adjusted head circumference.7

Columbia has reported approximately 20,000 ZIKV infected persons, of these 2,116 are pregnant women whose health and pregnancies are being closely followed. GBS cases in ZIKV+ patients have been documented in El Salvador, and the Pan American Health Organization (PAHO) has mobilized resources to educate populations, eliminate mosquito breeding grounds, and collect additional data. On February 1 the WHO declared a Public Health Emergency of International Concern (PHEIC), only the 3rd time this step has ever been taken.

ZIKV, nor any other flavivirus, has been previously linked to microcephaly, but ZIKV has been associated with Guillain-Barré syndrome (GBS), an auto-immune like disorder, that can be severe or fatal. However a recent WHO statement mentions an unpublished cluster of microcephaly in Polynesia in 2014, and the French Polynesian health authorities described at least 17 cases of central nervous system malformations in fetuses and infants during 2014–2015, potentially linked to Zika. Other reports (including this podcast with interviews (in French) with Dr. Henry-Pierre Mallet, head of the Health Surveillance Office Branch) list this as 18 cases of birth defects ‘probably related to Zika’, ten pregnancies were aborted, two babies died and the six living children are either in a vegetative state or have brain stem deformities. WHO cited a similar report but I am unable to find a direct link to the Ministry of Health of French Polynesia, to confirm this data.

A 25-year old European woman who was living in Brazil in a Zika endemic region became ill with fever, rash and pain at 13 weeks of a pregnancy. She had a normal ultrasound at 14 and 20 weeks, but abnormal findings at 29 and 32 weeks, including microcephaly and brain calcifications. The pregnancy was terminated and an autopsy of the fetus with documented severe brain abnormalities and cell death with abundant viral particles in the brain. ZIKV could be amplified only in the brain and a full-length virus sequence showed closest relationship to Brazilian ZIKV isolates.8 While this is a single case, it suggests that ZIKV is neurotropic. There is no commercial diagnostic test for ZIKV or vaccine.

Using data to gaze into the crystal ball
As with my blogs on Ebola (see this and this) I will try to use the data at hand to model the possible future outcomes of the pandemic.

Viral spread. It is clear that ZIKV can spread very rapidly throughout tropical populations as evidenced from observations in the Pacific islands and to date in South and Central America and the Caribbean. With no natural immunity, or vaccine, and abundant supply of the main vector, Aedes aegypti, infections are likely to continue within the currently affected countries. Brazil estimates that 1.5 million have been infected and will reach 4 million Brazilians infected by year end. Active transmission in Florida and the Gulf Coast states of the US is likely, and the range of Aedes aegypti in the US is shown in Figure 3. Both dengue and chikungunya currently infect part of this range. Florida has already declared a health emergency and is mobilizing mosquito control. If ZIKV can be significantly spread by Aedes albopictus, the range could increase into parts of the Midwest and Mid-Atlantic states. Reports of sexual transmission and virus in urine require further confirmation, but are unlikely to increase viral spread dramatically.

Figure 3. Range of the two predominant Aedes mosquito strains in the US (Source: CDC).

Table 3. displays the reported, confirmed and ZIKV positive microcephaly cases from February 2 and 12 data. A very large fraction of the reported, confirmed, and ZIKV positive microcephaly cases come from the NE region of Brazil (P value essentially =0). This data strongly supports a geographical association of the phenomenon, with Zika strongly suspected. Interestingly, estimates of microcephaly rates are remarkably similar in the Northeast region of Brazil and Polynesia (60-65/million population) and this translates to very similar rates per 1000 pregnancies (4-4.2) (Table 3). The highest estimated microcephaly rates in Brazil and 8-9 per 1000, hopefully providing an upper bound. 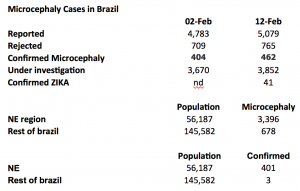 The massive international efforts to contain the Ebola outbreaks in West Africa were successful in containing and eventually eliminated infections and mortality. It is certainly hoped that the risk of developmental abnormalities in women infected with ZIKV is much lower than suspected, and that education and public health measures will limit the spread of the virus. This latest pandemic underscores the critical need for global health monitoring and capabilities.

On top of the sources outlined here, for ongoing up-to-date discussion see the Zika section of flutrackers.com, and all the genomics perspective and data sharing happening via the virological.org portal. Please contribute and follow the work of the International Zika hackathon, including the Hong Kong edition that GigaScience is participating in on Tuesday 16th Feb. 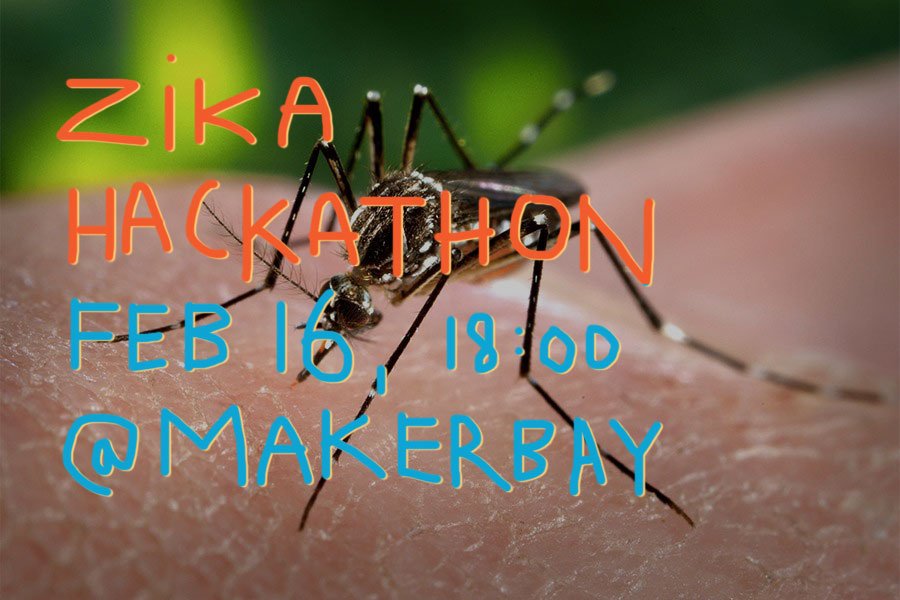