Guest Blog: The 2014 Ebola Epidemic: Approaches and resources to slow the spread of infection 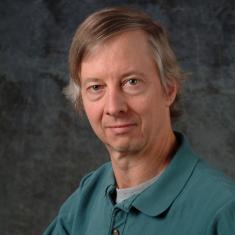 The Ebola pandemic presents one of the most terrifying world health crises in modern times, with devastating consequences in Western Africa [as this goes to press there are now over 10,000 infections and almost 5,000 deaths]. There is a vast amount of data on this crisis available in rapidly published articles and on the internet (check out PLOS Currents: Outbreaks in particular), including past and current numbers of infected; death and infection rates; predicted outbreak expansion; number of current and needed health care workers and treatment centers; required financial resources; and more. These available Ebola data can, and are, being used for a broad range of topics, for example a recent open access and data report from PLOS [1] provides an excellent mathematical modeling analysis showing the evolving nature of the virus and insight on its initial spread indicating limitations on predicting reproduction rate when using only genetic data. Prediction of progress of a viral outbreak is a key element in combating pandemics, for which ongoing expert research is essential. Educating the public to encourage appropriate and useful reaction and support is also needed, and the onslaught of data can be overwhelming. This guest blog is from Michael Dean from the Center of Cancer Research at the NIH who pooled together various available data to present a non-specialist view of the current pandemic status and predictions of disease spread, which can be compared against future numbers and the relative impact current and changing methods of control. [Note: the material presented here is from Michael Dean’s own perspective and does not represent the viewpoint of the NIH, or NCI.]

The 2014 Ebola Pandemic: Approaches and resources to slow the spread of infection
The current Ebola epidemic in West Africa represents the worst outbreak of this virus in recorded history; and has now been named by the WHO “… the most severe, acute health emergency seen in modern times”. 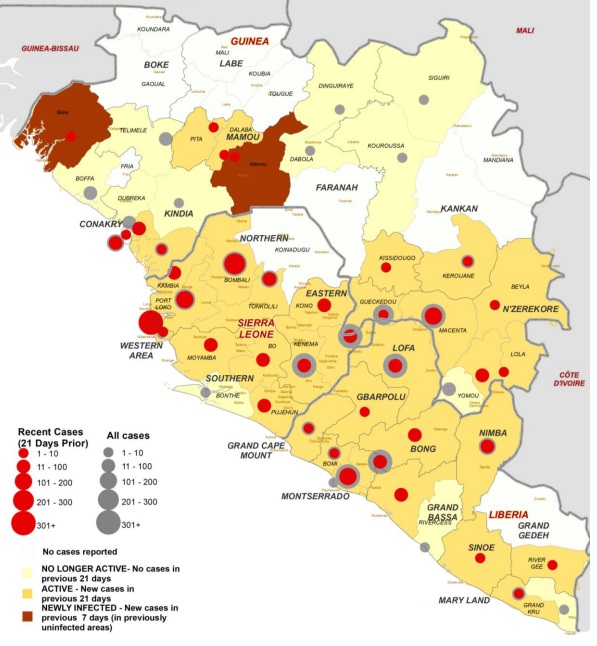 While many other viruses cause and have caused more deaths, Ebola has a higher mortality rate (50-90%) as compared to smallpox (30%), measles (25%), SARS (11%) and influenza (2%) [2]. The epidemic is almost exclusively confined to Guinea, Sierra Leone and Liberia (Fig. 1), to devastating effect both socially and economically, and the spread of individual cases to other countries is resulting in further economic disruption.

This blog is intended to be understandable by the non-specialist and to provide resources for further education. It has an overall goal of representing how a non-Ebola virus expert (although I have worked on viral genetics of HIV infection [3]) can access and synthesize broadly available data and information to outline what we currently know about the epidemic including:

• Current projections on the future of the epidemic (with future updates to compare predictions based on available data to the confirmed future to data.)
• Assess current and postulate alternate strategies to control infections, including both treatment facilities and personnel needs.

Several recent articles have modeled the current epidemic, estimated critical variables of viral spread and projected future infections [4-7]. The standard way to determine infection spread is based on the average number of individuals that an infected person is predicted to infect in an unexposed population: referred to as the Reproduction Rate (R0) [8]. Based on this, for the current outbreak, the R0 has been estimated to be between 1.5-2 [5, 7, 9]. Because Ebola is only transmitted from bodily fluids of symptomatic patients, the R0 is lower than most viruses. For example measles and whooping cough have a R0=12-18; chicken pox (R0=9); mumps, rubella, polio, scarlet fever and diphtheria (R0=4-7); SARS and HIV (R0=2-5) [9-12]. A R0 of more than one (>1) means that an epidemic is expanding, and a R0 <1 means the number of infections is declining. The obvious key to Ebola control is to prevent the exposure of infectious cases to other individuals.

Meltzer et al. at the CDC have created a modeling tool, EbolaResponse, to estimate future infections and aid in planning [4]. Using this tool, they estimate that without a concerted international effort there could be as many as 1.4 million infections by January 20, 2015. They also estimate that reported infections are under-reported by a factor of 2.5. These figures are in line with current estimates of the doubling rate of observed infections: Guinea-16 days, Liberia-24 days and Sierra Leone-30 days [7].

As there is no current vaccine or treatment for Ebola, other than medical care of infected cases, the fastest way to control the infection is through care of suspected and confirmed cases in an Ebola Treatment Facility (ETF). The CDC estimates that patients in an ETF have greater than a 10x reduced rate of transmitting the virus (R=0.12)[4]. Doctors Without Borders/Médecins Sans Frontières (MSF) has the most experience with Ebola in West Africa, and in the current epidemic, they have screened over 3200 people and treated over 2000 confirmed cases. MSF currently employs 239 international and 2,000 locally hired staff in the region. The organization operates five Ebola management centers, providing a total of 502 hospital beds in isolation.

The US military is currently constructing 17 ETFs, each with capacity to house 100 individuals. However they will not be complete these until the December, and by then there may be 18,000 or more new cases every 3 weeks [my estimate using 10/8/2014 reported numbers and R0 remaining at 1.5]. This 10% increase in patients in ETFs will lower the R0-value only to about 1.37-1.4 (Table 1).
With new cases appearing at an increasing pace, construction of new ETF beds also needs to accelerate to control the epidemic. International organizations are therefore calling for a more aggressive approach: “The WHO advises within 60 days we must ensure 70% of infected people are in a care facility and 70% of burials are done without causing further infection,” said Anthony Banbury, the UN’s deputy Ebola coordinator. The latest UN Roadmap Update estimates that an additional 230 burial teams are needed by December 1 across the three countries to meet this goal. This is not only a logistical and training problem, but will require mass social change because mourning, burial, and worship at gravesides are culturally important [13]. These strategies would bring the infection under control by the end of the year, but could require as many as 12,000 ETF beds to be constructed and staffed (Table 2). However with under-reporting and multiple compounding variables, accurate estimates are challenging, but critical for effective planning. 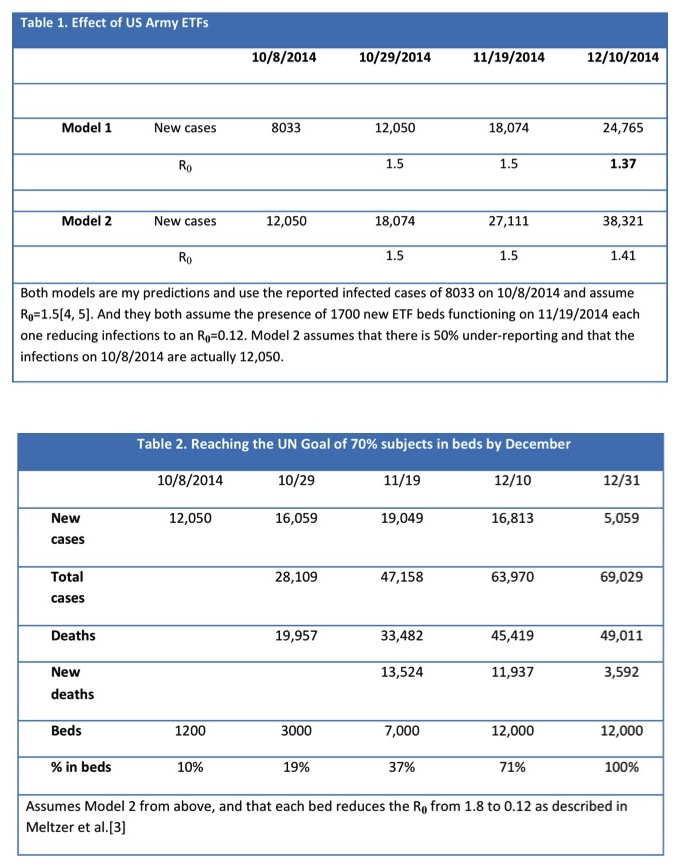 The construction and staffing of over 10,000 additional ETF beds would require a massive international effort. The US military is sending as many as 4,000 people to construct 1700 ETF beds in 4-6 weeks: an effort five times this size needs to be launched very soon to meet this UN goal.

Alternative Approaches
Both the WHO and MSF have begun to implement plans for alternative approaches for infected individuals that do not have access to ETFs. On October 2, MSF reported they have begun distributing 50,000 home disinfection kits. “We know these kits are not the solution to the Ebola crisis in Monrovia,” said Anna Halford, coordinator for the distribution. “But the scale of the epidemic, and the inadequacy of the response so far, means that we are forced to take unprecedented and imperfect measures.”

The kits consist of chlorine, soap, gloves, a gown, plastic bags, a spray bottle, and masks as well as health promotion messages. They could reduce viral spread by allowing people to disinfect their homes when a resident dies of the disease, and reduce contact with the virus while waiting for a resident to be treated at a hospital or ETF.

The WHO is planning to implement Ebola Community Care Units (ECUs). These are triage facilities staffed by community health workers providing isolation and minimal care (fluids, and oral medicines) as well as Ebola testing. The concept is to remove infected persons from homes where they can infect others, manage waste and coordinate with burial teams for safe burials, a critical component to infection control. Dr Les Roberts, the WHO Foreign Medical Team Coordinator, in Sierra Leone writes that they hope to have 150 ECUs in operation by mid-December as well as 2000 beds in ETFs, 700 of those providing treatment. Rapid Ebola testing is essential to separate people with other causes of fever from Ebola cases. There are currently only 12 of the estimated 28 testing laboratories in place. 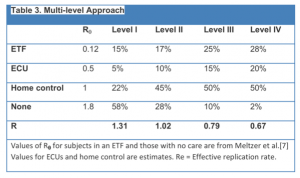 Using the published estimated R0 value of subjects in ETFs (0.12) and untreated subjects (1.8)[3], and estimating that subjects in an ECU will have an R0=0.5 and those in home care R0=1, increasing the levels of infection control over four stages (I-IV) can lead to control of the epidemic (Table 3). And by implementing these four levels over the subsequent 3 months results in a decline in case numbers by 12/31/2014, and a need for 6050 ETF beds and 3800 ECU beds. 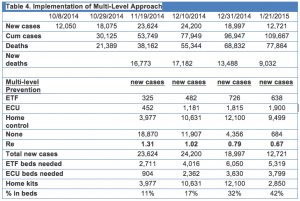 This plan would appear to be achievable given a continued rapid acceleration of worldwide effort and coordination. The UN has created the first emergency health mission to guide and coordinate international responses. Ongoing assessment and information as it becomes available relating, for example, to ETF and ECU construction, deployment of home disinfectant kits, speed in obtaining safe burial practices, deployment of increased resources and individuals, and detection and isolation of infected individuals. This data will allow comparison of current predictions and evolving disease status relative to the success of different mechanisms to stem this pandemic. Providing this type of information will aid in educating the general public and further aid in promoting public actions that can be properly directed toward supporting activities that have the best chance of reducing the spread of this pandemic and returning the focus to the places that are in most desperate need of help. 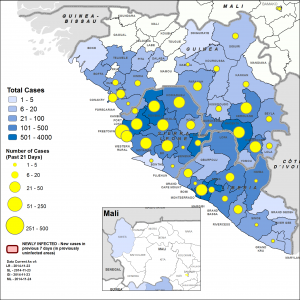 Many assumptions and estimates were made in the generation of these numbers and the world hopes that the epidemic will not be as severe as current projections suggest. Of note: the most recent data (Table 5, Figure 2), added after the completion of the blog, show that total cases have almost reached 10,000, but that estimated doubling times in Guinea and Liberia are longer than predicted (Table 6).

Table 6. a = Estimated doubling rate in days of the infection in each country from Meltzer et al was applied to the estimated cases of 9/17/2014. Date to double is the date in which the cases from 9/17/2014 should increase two-fold, and the doubling value is that number. Observe that even by 10/18/2014 neither Guinea nor Sierra Leone has doubled the cases from 9/17/2014 indicating that the doubling rate is slower than the estimate. However, Sierra Leone had already more than doubled the 9/19/2014 case number by 10/13/2014.

Up to date numbers and informative graphs can be found on Ian M. Mackay’s blog as well as Healthmap.org.