We started working on this research project together because we felt quite strongly that the palm-sized MinION™ nanopore sequencer from Oxford Nanopore Technologies would be the next big technological revolution in genome sequencing.

The technology relies on protein ‘nanopores’ to determine the sequence of a strand of DNA. The protein nanopores were developed to allow for the passage of single-stranded DNA. As the DNA passes through the nanopore, it causes characteristic electrical signatures, from which bases can be identified, and the sequence of the strand determined.

In addition to the impressive achievement of bringing a nanopore-based method for genomics to the point of production, we saw the size and portability of the MinION™ as holding the potential for the mobilization and democratization of genomic analysis.

As this technology has been in the development phase for a long time, it has been really fun to experiment with an actual piece of fieldable equipment.  When we got our hands on one, we knew we wanted to do something that would not only be informative to the field but also utilize its unique capabilities (handheld, laptop powered, portable). 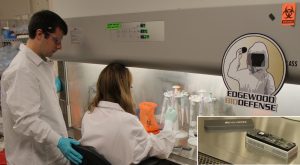 Our research relied on an important method called ‘amplicon sequencing’. This is a powerful approach that can help identify biological agents in complex samples. It’s a variation of a commonly-used lab method for amplifying DNA called Polymerase Chain Reaction or ‘PCR’. In amplicon sequencing we amplify a conserved genomic region of interest to large amounts, drowning out the rest of the agent’s genome.

An amplicon approach can help mitigate background contamination and offers good coverage over a relatively small piece of genetic material.  It’s been used for microbiome studies, human genetic studies, and other research that doesn’t require whole genome sequencing.  To get sufficient coverage depth to accurately identify the biological agents within a sample, we adapted the amplicon sequencing approach for the MinION™.

Within six hours, the device generated sufficient data to identify an E. coli sample down to species level, and three poxviruses (cowpox, vaccinia-MVA, and vaccinia-Lister) down to strain level.  We were able to distinguish between the two vaccinia strains despite them being closely related and over 98% similar to each other.

Using the amplicon approach, we were able to determine three things. Firstly, the MinION™ can be used efficiently as an amplicon sequencer right now. Secondly, we could generate enough coverage depth in a six hour run to accurately differentiate between closely related species and strains. And finally, that the technology is constantly improving, even as we were doing these experiments and writing our manuscript.

All of this technology is developing so rapidly that it can be hard to know how much will be possible in even a few months’ time. Our hope is that this publication will demonstrate to the field that amplicon sequencing is an incredibly effective method for rapidly and accurately detecting organisms using the MinION.

In the long run, this brings us one step closer to moving clinical diagnostics to the bedside, enabling point-of-care test that are rapid and accurate, enabling targeted and highly effective treatments.

The conclusions and opinions presented here are those of the authors alone and are not the official policy of the US Army, ECBC, or the US Government.

No description. Please update your profile.