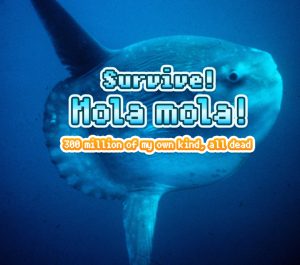 The ocean sunfish, must officially be one of the world’s weirdest creatures to enter the “genome club”, and have its genetic code mapped. Laying the most eggs of any other known vertebrate (up to 300,000,000 at a time), and starting out as the size of the head of a pin, sunfish grow to become to largest bony fish in the sea. Eventually weighing up to 2,300kg and measuring up to 3.3m in length, the ocean sunfish has been observed to grow at almost one kilogram per day. To put this in context, other fish grow at 0.02 to 0.5 kilogram per day. The morphology of the ocean sunfish is also very different from other fish, having lost its caudal fin and hence also known as a “half-fish”. Despite “Survive! Mola mola!” being one of the most popular video games in Japan, how they manage to survive and grow so rapidly from munching nutritionally poor jellyfish is an interesting challenge to understand from a scientific perspective as well.

Wading into this challenge have been a team of scientists including the lab of Byrappa Venkatesh and Sydney Brenner, who, in 2002 brought the genome sequence of the Pufferfish (Takifugu rubripes) to light, making it the second vertebrate genome to be sequenced. Fugu was found (at the time) to have the smallest genome of any vertebrate, at 390Mb roughly one eight the size of the human genome, making it an excellent ‘reference’ genome for understanding the structure and evolution of genomes. As one of the closest relatives of the Takifugu rubripes, the group were interested to see how compact the Mola mola genome was, but being 730 Mb this is compact for a vertebrate genome, but not spectacularly so.

Venkatesh, who led the project from A*STAR, said: “Pufferfish and ocean sunfish belong to the same order but differ dramatically in morphology. At the early stages of development, ocean sunfish larvae look similar to pufferfish larvae with spines sticking out. We thought ocean sunfish would be a useful species to identify the genetic basis of morphological innovations. So we were keen to sequence the ocean sunfish genome and compare with the pufferfish genome, to identify genetic changes that have occurred in the sunfish lineage and that might give clues to the highly derived phenotype.” 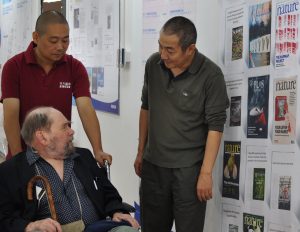 Nearly two decades on from the initiation of the project, Sydney Brenner, has given some further background on how it came about: “I became interested in the Mola mola in the 1990’s, not long after we began work on the Pufferfish, Fugu. We chose that genome because it was the smallest one reported and reading about the evolution of fishes made me interested in the Mola mola. It seemed to be the end of the line with many features lost. I tried for many years to obtain a sample but failed. There was one on display at the aquarium in Northern California but when it died it was their policy to return it to the ocean. When I visited the Marine sciences laboratory in Florida I mentioned my interest in it. To my great surprise, Paul Linser who had worked with in the Scripps telephoned me one day to tell me that a Mola mola had swum up the intercoastal canal and had been found by the private aquarium close to the Marine Laboratory. It would be exhibited there and when it died he would arrange for me get some blood. This was our sample which was brought to me frozen in liquid nitrogen to the Scripps and which I carried to Singapore and which we used for the sequencing. Fish have nucleated red blood cells a very useful source of DNA. We still have many friends in marine institutes to help us in this exotic interest.”

Despite the less interesting genome size meant the species was passed over for much of the genome evolution work, being a bizarre “natural mutant” meant there was continuing interest in studying the extraordinary phenotypes. With the launch of the G10K project to sequenced 10,000 vertebrate species, this was high on the list for BGI to sequenced as part of their pilot to 100 species for the consortium. Funded by China National Genebank (CNGB), Guojie Zhang, Associate Director of CNGB, and a corresponding author says: “This is one of the 30 fish genomes have been sequenced for the G10K project. The availability of high throughput DNA sequencing technology makes it possible to sequence whole genomes of a wide range of ‘non-model’ species, allowing us to uncover the genetic basis of their phenotypic diversity and their adaptation. Our study mainly focused on the genetic background of the ocean sunfish’s fast growth rate and particular body shape. We found that several genes involved in growth hormone signalling evolve very fast in the ocean sunfish when compared to other bony fishes, which may explain its large size and fast growth rate.”

Venkatesh added: “We found changes in genes encoding for collagen and cartilage formation. This may contribute to the development of predominantly cartilaginous skeleton in this gigantic fish. Vertebrates exhibit a wide diversity in their morphology, physiology and behaviour. Understanding the genetic basis of this diversity is a major goal of evolutionary biology.” Further adding “I think we still have a lot to learn from the sunfish genome assembly. One way to pinpoint more genetic changes specific to sunfish would be to sequence more closely related species such as porcupine fish, box fish, triggerfish, and triplespines (all are tetraodontiformes fishes) and a closest outgroup to this Order. Our present analysis also suggests that the genetic changes underlying many of the derived phenotypes could be in the regulatory sequences.”

The genomics data is available in the public databases and GigaDB for others to mine and do these future comparative studies. With us recently publishing a project announcement for the “Transcriptomes of 1,000 Fishes” (Fish-T1K) project (also featuring Venkatesh) and the genome of the channel catfish, fish ‘omics research is reaching a high water mark, but few of these coming genome projects will likely be as bizarre as this new paper looking at these gentle giants of the deep.