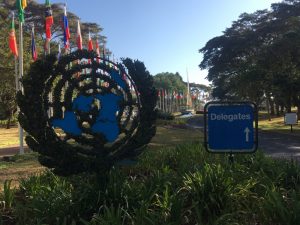 As GigaScience has the aim of opening and democratising science as far as it can go, we even work towards the involvement of non-professional “citizen scientists” in the scientific process. Regular readers of this blog and journal will have seen the many crowdfunded and educational community genome projects we have promoted and participated in (see BauhiniaGenome). In December 2017 our Executive Editor Scott Edmunds was part of the Citizen Science delegation that attended the Science-Policy-Business Forum at the UN Environment Assembly (UNEA3) in Nairobi (read more here), with the aim of establishing a Global Secretariat to work with the UN and promote citizen science across the globe. This was the first time a coordinated push was made to promote Citizen Science at the world’s highest-level decision-making body on the environment. A lot was achieved on getting these approaches onto the agenda in many sessions, presented at the closing plenary, and even getting citizen referenced in UN resolutions. 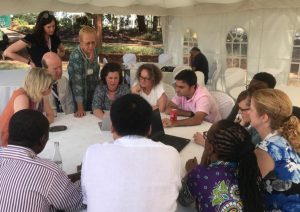 Follow the success at UNEA3, the 20-person delegation assembled again for the 4th UN Environment Assembly this month to keep up the momentum and further promote Citizen Science on the global agenda. Following the equally inspiring International Data Week meeting that was held in Botswana last year it was great to be back in Africa. This was a chance to see how far the movement has come, and also provide a venue for a governance meetup for the new Citizen Science Global Partnership that was the biggest achievement to come from the previous gathering. Tackling the issue of geographical gaps in Citizen Science networks, building from the well established US, European and Australian Citizen Science Associations, since the previous meeting CitizenScience.Asia has worked with lawyers to go down the formalization route, a new Ibero-American network has been announced (Red Iberoamericana de Ciencia Participativa), and there have been continuing moves to form an African Citizen Science Association. The Global Partnership again had a logistical meeting after the Science and Business forum hosted by the African Citizen Science Association at the lovely United States International University-Africa campus in Nairobi.

This time for Africa
This was the second time that the Science-Policy-Business Forum was hosted at the UN Environment Assembly, and with the theme of #SolveDifferent this year the format and themes changed slightly in this edition. While there were still a large variety of session formats, including Q&As and TED-talk style presentations in the opening and closing sessions, a new feature was the “GreenTech Startup Marathon” where 9 Green Tech entrepreneurs got to give “Dragons Den” pitches to a panel of judges. With startup investment at an all time high, not enough is going into green tech, and this was an interesting experiment to see some of the latest green tech solutions including pollution detecting drones, solar microgrid generator finance, and eco-crowdfunding platforms. While staged for the audience this hopefully provided a taste of what with come out of the new UN Green Technology Hub and accelerator launched at the meeting. Another addition was the “World Environment Situation Room”, for pop-up discussions and demos bringing together and visualizing many environmental data streams.

The @UN Assistant Secretary-General @satyatripathi standing together with the @CitSciGlobal Delegation at the UN #SciencePolicyBusiness Forum to mark the occasion for #CitizenScience pic.twitter.com/x4HnorNpnz

In the period between assemblies Citizen Science seems to have gone mainstream, and the delegation didn’t even have to raise the issue for the topic to get discussed in most sessions. Marine litter surveys utilizing citizen participants are now part of the UN and European Union research toolkit in quantifying and addressing the plastic pollution problem. And the European Union has developed an inventory and analysis of citizen science practices that can assist environmental policy.

Members of the delegation participated in a number of sessions, Anne Bowser from the Citizen Science Association and Martin Brocklehurst and Steffen Fritz from the European Citizen Science Association giving their input in many sessions. The delegation also hosted a session on “Citizen Science for Smart and Sustainable Cities of the Future” that was live streamed (see the archive here). On top of launching a new “what is Citizen Science” short film for the Global Partnership produced by the Crowd and Cloud (also shown in the closing plenary) the session also featured Kathleen Rogers from Earth Day Network announcing the Earth Challenge 2020. An ambitious plan to engage millions of global citizens to aggregate and collect more than one billion data points to answer crucial scientific and environmental questions.

Observing the Earth Observation Observers
We were particularly interested in the “Big Data, New Frontiers” extended session which was very focused on Earth Observation data. With Maurice Borgeaud from the European Space Agency and European Union Earth Observation Programme (Copernicus) starting the session off talking about the 120PB of satellite Open Data they have shared. As a result of open licensing they have >200,000 registered users, and the rest of the talks followed many of the downstream users empowered because of this. Much of this work is overseen through the Global Earth Observation System of Systems (GEOSS) that integrates and shares data by connecting existing infrastructures using common standards. At present there are more than 400 million open data resources in GEOSS from more than 150 providers such as NASA, ESA and the commercial sector.

Being in the range of petabytes there are challenges in sharing this data, both in terms of infrastructure challenges and how to visualize and interpret this in a “decision ready” form that governments and citizens can utilize. Open Data and tools will be crucial in this, and a number of platforms were presented that demonstrate this. Pierre Lacroix presented on the UN Environment open source MapX viewer for sharing and visualising geospatial data,that has potential for Citizen Science users to analyse and tell stories from important environmental datasets. Stuart Minchin presented on the efforts of Digital Earth Australia, and how making their Geospatial Data Management and Analysis platform into the open source “Open Data Cube” has enabled countries around the world (including 5 in Africa) to deploy their own instances. Adam Smith presented a similar approach from Decartes Labs, a spinout from Los Alamos National Laboratory that presents science-ready imagery from multiple Earth Observation and environmental data sources. Even the satellites themselves are being democratized, with planet.com creating a network of low cost earth observation satellites hacked from smartphones. Andrew Zolli presenting on the platform that provides the data to researchers openly with the proviso that they share processed outputs in a similar manner.

Firm endorsement from Maurice Borgeaud, Head of #earthobservations at @esa stating: “#CitizenScience is a must”. Awesome! #UNEA4 #SciencePolicyBusiness pic.twitter.com/J5hGpbZvHT

With petabytes of open data available there is a lot of potential for the big-players in big-data to do interesting things with it. Coming from a life-sciences background it was interesting to see there is now an Allen Coral Atlas that provides the highest resolution earth observation map of the world’s coral reefs. UNEP and the European Commission announced a collaboration at the meeting involving Google Earth to launch a data platform on water-related ecosystems around the world. The platform enables better understanding of changes to water bodies by providing access to satellite data and enabling comparative analysis over time. The initiative seeks to improve monitoring of progress to specifically meet SDG target 6.6 which covers protecting and restoring water-related ecosystems. The Google Earth Engine is a great example of what infrastructure can be built on a 40 year petascale catalogue of satellite imagery and geospatial datasets. Providing planetary-scale analysis capabilities, and being made available for researchers and developers to detect changes, map trends, and quantify differences on the Earth’s surface. Researchers can also use this data to study how these changes relate to issues such as  biodiversity or infectious disease outbreaks (see our Zika example pictured).

These technologies and platforms have huge potential to engage the public to better understand the risks of climate change, and also to allow Citizen Scientists to dig into the data to see missing patterns and trends relating to their own backyards. Especially by integrating their own smaller scale environmental sensor data. While Silicon Valley’s contributions can help democratize the easy of interacting with this data, for evidence based policy Gilberto Camera from GEO pointed out we need socially robust results. Trust is key, as governments and citizens may not trust multinationals like Google, but will trust their own locally collected data.

CS versus the SDGs
A lot of the focus at the UN is quantifying the progress of the Sustainable Development Goals (SDGs). Governments have made a commitment to achieve these by 2030, although there is almost no indicator data on the state of the environment. Jillian Campbell, Chief Statistician of UNEP presenting the depressing statistic that it is estimated there is only data available on around 30% of the indicators. There is huge potential for citizen science to fill these gaps, and the Citizen Science Global Partnership has set up a SDG and Citizen Science Maximization group specifically with this issue in mind. In the closing plenary we again issued a declaration on our aims and commitments specifically tackling the context for meeting these goals. The Citizen Science Delegation’s statement at UNEA4 was as follows (and also see the video of Anne Bowser reading it).

The Citizen Science Global Partnership is working with international agencies such as UN Environment and UNESCO to create a Roadmap to support CITIZEN SCIENCE across all UN activities, and is seeking additional global partners in Science, Policy and Business.

Many of the delegation stayed on through the main UNEA4 assembly to see things through until the UN Resolutions were passed at the end. Once again there was success in getting Citizen Science included in the UN resolutions, and it was particularly pleasing to see resolution L.27 on “Keeping the World Environment under Review: Enhancing UNEP’s Science-Policy Interface and Endorsement of the Global Environment Outlook” explicitly state the UN GEO environmental assessments should be “Encouraging citizen science efforts and their potential contribution as a complementary source to fill data gaps”.

In the main assembly the Science and Technology Major Group issued a statement presented by Stephen Stec endorsing the utility of Citizen Science data, encouraging Member States to support evidence-based decision-making using it to increase scale and resolution through the growing field of citizen science. Using language closely related to our UNEA3 summary, it stated that Citizen Science emphasizes collaborative intelligence and co-creation to facilitate scientific and community-based solutions.

Being a gathering of the worlds top environmentalists, everyone present at the meeting were very aware of the urgency in tackling climate change and promoting sustainable development. Confronting the challenges we face can be stark enough, but this year the meeting was particularly sombre because of events out of everyone’s control. With the Ethiopian Airlines crash the day before the main assembly, many delegates and UN employees were on board, so many of the attendees were shocked to lose close friends and colleagues. There were tributes and moments of contemplation at the opening and closing of the meeting, and we would like to end this with a dedication to all who were lost in this tragedy. So many of who had dedicated their lives to make a better planet for us all.