Community Genomes: From the Peoples Parrot, to “Crowdfernding”.

Despite the precipitous drop in the price of DNA sequencing, global credit crunches have shrunk the science budgets able to properly take advantage of this. At least in the case of non-medical research. With acceptance rates for some of the major funding agencies in the US declining into single digit percentages, the research community needs to look to new ways of supporting the important work they do. One potential development to redress the balance is for scientists to cut out the middleman, and go appeal directly to the source of most scientific funds – the tax paying public. This more democratic approach to doing science rewards those who can engage directly with others. In a world in which scientifically illiterate politicians are unable to fathom why they fund fruitfly genetics, cutting them out and appealing directly to the public may be a more successful approach for basic science projects with ecological or cultural significance not covered by commercial R&D, and may not obviously tick the “translational medicine” or “economic importance” boxes that funders are increasingly also being pushed to look for.

Power to the Peoples Parrot 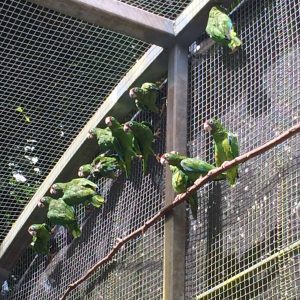 One of the goals of GigaScience is to help promote more open ways of carrying out science, and we were proud to have published as our first Data Note article the first community funded genome project: the “peoples parrot” Amazona Vitatta. The Puerto Rican Parrot was one of the first published bird genomes (and first Parrot species), but more importantly this project showcased a new and inventive way that smaller institutions in remoter part of the world can contribute to a “big data” field like genomics. As a beautiful but critically endangered species, and the last remaining native parrot in US territory, the Puerto Rican Parrot is an iconic symbol of its home, featuring on US quarter coins, and inspiring strong feelings on the island and beyond. Once numbering in the millions, due to habitat destruction and hunting by the mid 1970’s the numbers of birds had gone down to 16 individuals. From this low point an intensive conservation and breeding program project was launched to bring them back from the brink, although with such low genetic diversity breeders needed a way to identify the most genetically compatible birds for their breeding programs.

Sequencing the genome would provide a boon for this type of work, but unable to get funding and support from the usual channels, Taras Oleksyk and colleagues at University of Puerto Rico-Mayagüez decided to take a more grassroots approach and appeal directly to the Parrot lovers on the island. Mobilizing support on their facebook page, after raising the several thousand dollars through art and fashion shows promoting parrot conservation, working with a commercial sequencing company they were able to sequence to 29x coverage of the genome. Working the annotation process into the undergraduate teaching program at their college, they not only transferred invaluable bioinformatics skills to the community, but produced a draft covering 76% of the genome that was published and promoted as a GigaScience Data Note. After receiving fantastic news coverage (and dubbed “the Peoples Parrot” by Bio-IT World), this helped spur additional funding through more fashion shows, and sponsorship from diverse sources as sequencing, car and beer companies, and with the support of their university the lab were able to set up the Caribbean Genome Center (see Taras’s slides from our session at last years ICG conference on this).

On top of the column inches and fashion spreads, two years on now is a good time to look back on what has been achieved scientifically from this project. A Parrot genome browser is now available, and the additional resources have enable improvements to the assemblies, as well as new transcriptomes and microbiome work. From one parrot, the team has been inspired to do a “Parrots of the Caribbean” project, looking at the 8 extant Amazona species of the Caribbean and their closest relatives on the mainland. Already working with the draft genomes of a few of these, the main goal is to use these species as a lens to study island evolution. Most importantly, the draft genome has already provided benefits for the captive breeding program, with a set of microsatellite markers produced to provide unique identifiers that will enable them to monitor recovery progress and population dynamics. 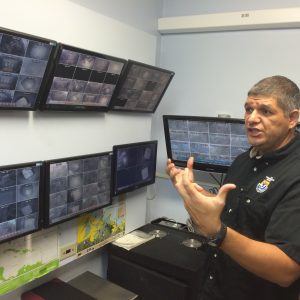 At the Society of Molecular Biology for Evolution meeting in Puerto Rico this summer, GigaScience were privileged to come face to face with one of their genomes, getting a tour of the El Yunque forrest breeding facility from US Fish and Wildlife Service biologist and center manager Jafet Velez (pictured). Checking out their slick facilities including CCTV feeds from all of their nesting boxes and a medical room supplied with endoscopes and x-ray machines, it was awe inspiring walking through the aviaries with social groups of birds flying overhead. While nowhere near the size of the flocks of thousands of birds witnessed by Columbus on his arrival on the island, it was still gave goosebumps to catch a glimpse of what it must have been like. The future of the birds is looking much brighter now, with increasing success rates for the release program, the numbers of birds is now over 400, and this summer the first parrots to successfully breed in a natural nest outside a national forest for 144 years were sighted. To see more of our visit check out our photos on facebook.

With Fronds Like These. Crowdfunding to the Rescue.
While the future is looking bright for bird genomics with the genomes from around 50 bird species now currently available, fern genomics has a long way to go to catch up. Despite having nearly the same number of species as birds (roughly 10,000), there are currently no sequenced fern genomes. With ferns being the second largest group of vascular land plants, and dominating most of the history of plants on land until their upstart flowering plant cousins came on the scene 90 million years ago, this missing clade is an important gap in the understanding of plant evolution. This may partly be due to fern genomes being larger and more difficult to sequence (and curiously having more chromosomes than most other plant species), but most of these genomes are still smaller than the already sequenced Loblolly Pine and Norway Spruce genomes, so the reasons this has not happened yet are more economic than technical. Two papers on fern genomics published this week in GigaScience focus on this very issue, with Emily Sessa and “fronds” from the fern research community highlighting what they feel should be the first two species to concentrate on. With Ceratopteris, the “Arabidopsis of the fern world” due to its popularity as a model for studying sex expression and mating systems, and the aquatic fern Azolla proposed as the best pair to represent the diversity and more than 400 million years of independent evolution. 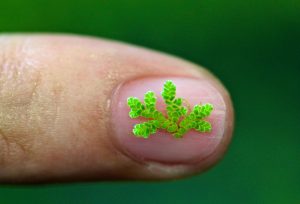 Due to its compact genome a quarter the size of the human genome, Azolla makes are particularly promising first candidate, especially as it has a very interesting biology, being a superorganism that lives with an harbors a nitrogen-fixing cyanobacterium symbiont. Playing an important role in rice cultivation by producing a natural nitrogen biofertilizer, and able to grow incredibly rapidly (doubling its biomass every other day) it has great potential as a biofuel, as well as for carbon sequestration, phytoremediation and wastewater treatment. Despite these obviously very strong selling points, sequencing the organism has falling out of the scope and interest of the major funding agencies, so fern researchers have had to matters in their own hands and follow the community genomics approach of the Peoples Parrot. With the growth and increasing success in recent years of crowdfunding platforms, this was the approach Kathleen Pryer and Fay-Wei Li from Duke University decided to take, utilizing the relatively new Experiment.com website, because it was completely science oriented and would have a more focused (if smaller) audience than the big players like Kickstarter or Indiegogo.

In the second of our fern articles (and adapted from a guest blog), they recount their ultimately successful experiences obtaining enough funding to sequence the second of our highlighted community genomes. Being savvy users of social media (see Kathleen’s brilliant video after naming a genus of ferns after Lady Gaga), “Team Azolla” used a Reddit Science AMA (Ask Me Anything) to spread the word, and from that momentum started to build with coverage in blogs and traditional media such as The Economist, USA Today and Scientific American (see “in the news” on their website). Managing to raise a total of $7,160 from 123 backers, BGI eventually joined in and said they would cover the sequencing costs, but this would not have happened without the wide exposure and coverage of the project. The additional money raised is now being used to make a much better quality genome using optical maps, as well as genome/metagenome resequencing and comparative transcriptomics to further elucidate the genomic basis of symbiosis and nitrogen fixation.

This was well timed to take advantage of the growing success of Experiment.com, which recently broke the million dollar barrier of funding raised for projects, and will certainly be the first of many crowdfunded community genomes we will see from the website. With the cost of sequencing continuing to plummet, more and more universities will use genomics projects as teaching exercises for students to learn computational biology in a similar manner to the Banana Slug (or “cyberslug”) genome project at UCSC, and researchers will increasing exploit crowdfunding platforms, as this newly posted attempt to fund to sequencing of the North American wood frog genome further demonstrates. With USB drive sequencers finally a reality there is talk of increasingly “democratized sequencing”, and taking the community approach to its logical conclusion, it will be exciting to see how long it will take for citizen scientists to get involved and produce the first truly people powered genome project, by the people, for the people.

Taras and the Puerto Rican Parrot will also feature in ConGen 2015 (“Recent Advances in Conservation Genetics”) held January 12 – 22 2015 in Puerto Rico. If you have an interest in applied conservation genetics see: http://congen2015.com/ 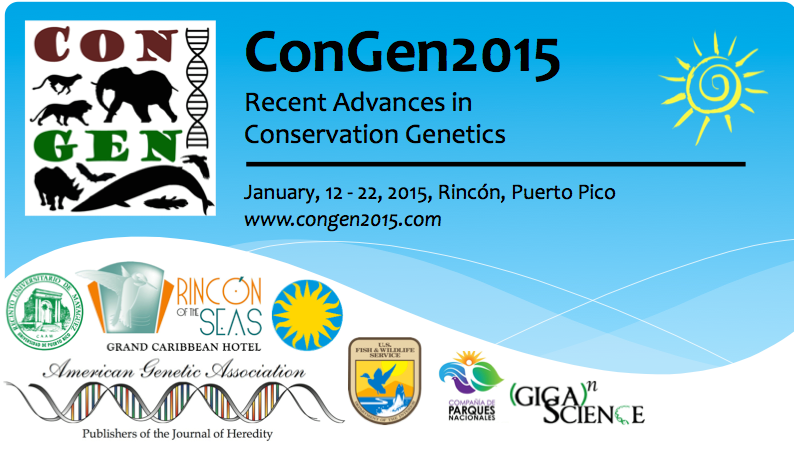