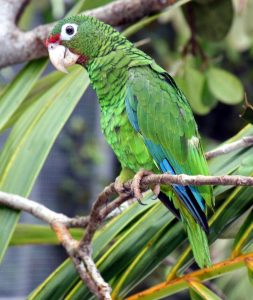 A Grassroots Funding effort in Puerto Rico enables genome sequencing of the critically endangered Puerto Rican parrot
The rationale and scope for GigaScience has been to cover and provide a home for the growing number of studies producing and handling large-scale biological data, and this “big-data” data bonanza is not just due to well funded labs, but an increasingly globalized and distributed network of researchers. In the field of genomics this has been driven by a precipitous drop in price due to advances in technology, as well as the economies of scale provided by big sequencing centers such as BGI (co-publisher of this journal), and the Broad and Sanger institutes. Countering this there has been much talk recently of the “democratization of sequencing” brought about by the advent of much smaller and cheaper desktop sequencers (and used as a slogan by some of them manufacturers).

Firmly demonstrating that genomics is becoming more democratized, today marks the publication of a unique study providing the genome sequence of the critically endangered Puerto Rican Parrot (Amazona vittata) by Taras Oleksyk and colleagues at the University of Puerto Rico-Mayaguez. While the sequencing and analysis of the genome of the only surviving native parrot in US territory provides benefits for avian research and conservation, what is most remarkable is how the study was carried out. Highlighted in an accompanying commentary by our editorial board member Stephen O’Brien is that the work is a product of a small rural college project in Puerto Rico that was funded by student-organized art and fashion shows and shows how accessible and affordable genomics has become. The genome paper is our first short “data note” article type we have published as the paper purely describes the data collected so far, although the accompanying commentary goes into a lot more detail on the interesting history, strengths and weaknesses, and implications for conservation.

In little over a decade after the human genome project was completed at a cost of 3 billion dollars, the cost in reagents to sequence a genome such as the Parrot is now less than 10,000 dollars, making it possible for smaller institutions to contribute to a field previously considered the domain of large sequencing centers. Money was raised in a variety of creative ways, including student organized art and fashion shows (see this local TV coverage with an interview with the lead author in English), social-networking sites (follow them on Facebook), and private donations from Puerto Rican citizens wanting to promote research on their local wildlife.

The Puerto Rican Parrot once flourished throughout Puerto Rico, but its population rapidly declined during the 20th century due to extensive habitat destruction. By 1975, only 16 birds remained. Since then, through extensive conservation efforts including captive breeding programs the number of these parrots has grown, although the population is still exceedingly low, and the species remains on the critically endangered list. Recent conservation efforts for other endangered species are now working to incorporate genome information to better assess the genetic health of endangered species and provide tools for targeted breeding. With this breeding season being particularly promising (87 chicks hatching), the long-term prospects of this enigmatic bird will be given a boost given the new genomic resources provided here.

Assembly and annotation of the genome were carried out as part of the undergraduate education program at the university, which is not only a boon for developing technically savvy young scientists in Puerto Rico, but also serves as an example of how students can take part in community curation projects to aid in processing the increasingly unmanageable amounts of data now being generated throughout the world. With tens of thousands of new species genomes likely to be released in the next few years from projects such as the Genome 10K, and a shortage of qualified bioinformaticians and researchers able to assemble and make sense of this data, this project shows one way that young scientists and students can be harnessed and trained to deal with it. We have covered exploratory work towards community annotation in this blog before, but this project provides a fantastic example of it in practice.

In keeping with our and the communities goals of making all data fully and freely available, all data from this project are available in our GigaDB database from this DOI, and the raw reads and scaffolds have been also submitted to the ENA and GenBank. With only a handful of bird species genomes published so far, this rare Parrot has leaped to the top of the bird genomics tree, although it will not remain lonely for long with the Genome10K and Avian Phylogenomic projects having completed the assembly of 58 species, and only last month the genome from the Darwin Finch was released in our GigaDB database. Sequencing depth of the parrot was quite light (29x), covering some 76% of the genome. Annotation is still ongoing, but the project will continue to post new versions on its website.

As BGI is currently covering our open-access article processing and data hosting charges, precious funds raised by the community will have been spared for the project, and the papers will hopefully raise awareness in Puerto Rico and beyond, as well as further funding for the birds plight. We have already been receiving some coverage in publications such as Bio-IT World and Genomeweb so hopefully this will help raise further awareness and funding. For updates on the progress of the project and their money raising effort follow their Facebook page.