A Christmas Gift To You From GigaScience. Scientists have Unwrapped the Reindeer Genome.

A New High-Quality Reindeer Genome Sequence Provides Resources for Studying Evolution, Domestication, and Adaptation to Arctic Climate. But not the secrets of Christmas. 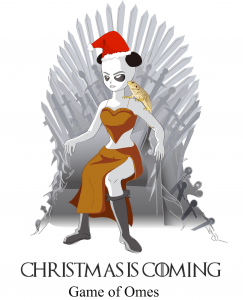 Ewan Birney has previously blogged on the Genome Days of Christmas, but today the full-text version of a particularly Christmassy species has just been published to add to that list. Coming so close to Saint Nicholas’ Day, its appropriate that an iconic animal associated with the festivity is getting a jump on the holiday spirit by joining the list of species to have its genome sequenced. And is contributing to an advent calendar of festive genomic datasets in our GigaDB repository include the turkey, and little donkey. Following the seasonal coverage our penguin genomes received previously, reindeer has already been popular this year, with readers joking on twitter whether the annotated genes throw any light on nose pigmentation or flight adaptation. While unlikely to reveal the genetic basis of these traits, this genome still provides a great resource for gaining greater understanding of the processes of evolution, domestication, animal husbandry, and adaptation to extreme environments. The compact genomes of bats and birds have suggested a reduction in genome sizes might be linked to adaptation to flight, but Rudolph has a larger genome size than the bat and bird genomes we’ve helped set free.

The reindeer genome is now available.
The effect of the Mc1r gene on the peripheral olfactory system isn’t coveredhttps://t.co/n3fzkimgBh pic.twitter.com/tatFN9Ollj

The reindeer or caribou (Rangifer tarandus) is the only fully domesticated species in the deer, or Cervid, family. It is also the only deer that has a worldwide distribution: spanning boreal, tundra, subarctic, arctic and mountainous regions of northern Asia, North America and Europe. Unlike all other cervids, it is not just the male deer that grow and shed antlers, but also the females. From an animal husbandry standpoint, reindeer milk is far richer in protein and has less lactose than cow’s milk. The latter aspect makes the availability of this milk of interest given the high percentage of lactose intolerant people in the world. With this variety of unique features, the availability of a reindeer genome sequence can provide an entire sleigh-full of new information, and is a welcome new member to the elite club of domesticated species with reference genomes, including the cow, sheep and goat.

This work was carried out by a team of Chinese researchers from the Chinese Academy of Agricultural Sciences in Changchun and the Northwestern Polytechnical University in Xi’an. The researchers took a blood sample from a two-year-old, female reindeer of a domesticated herd maintained by nomadic Ewenki hunter-herders in the icy Greater Khingan Mountains of China. They sequenced, assembled, annotated the genome and showed it was of high quality. Comparison of the reindeer genome to the genomes of related species and to humans, revealed that the reindeer genome size (2.6 GB) is slightly smaller than that of humans, cows, and goats, and about the same size as sheep.

Zheping Li, the first author of this research, noted that their analysis also identified “335 reindeer-specific genes that are likely to aid in understanding the special biological characteristics of reindeer. These could also be very useful in understanding the evolution of the reindeer as well as the entire Cervid family in future comparative genomics studies between reindeer and other ruminants.”

With this goal in mind, the researchers also constructed an evolutionary tree using the new genome and the already available genomes of members of the bovine family. They found that reindeer, cattle, and goats separated from a common ancestor approximately 29.6 million years ago. This was during the Oligocene epoch where one of the major changes was the global expansion in grasslands. This work one of the first outputs to come from a wider project to de novo sequence 42 ruminant species to help study their phylogeny, evolution of the rumen and horn, geographic adaptation and migration. A second related study from this project has also just been published, with the endangered Marco Polo Sheep genome providing helpful data to boost conservation genetics and exploiting useful genes in sheep breeding. 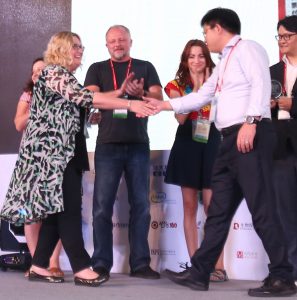 This article was one of the winners (pictured receiving their award) of the inaugural GigaScience competition and prize track that is used to promote new, cutting edge, research. Zhipeng Li presented their work in a special session at BGI’s 12th annual International Conference on Genomics in Shenzhen on the 27th October. As an open-science competition this and the other winners’ articles were reviewed in a fully open manner, where the public could follow the entire publication process from having the draft article openly available in Biorxiv, the peer review process done live with reviews made available prior to publication decision in an ICG12 channel at the Academic Karma overlay review system, followed by editorial decisions, manuscript revisions and article publication with all editor, author, and reviewer correspondence made available with the published article. Sticking to the open science theme, as with all our studies all the supporting data are available in NCBI and the GigaScience GigaDB database. You can see more on the prize winners in GigaBlog here, and as the prize track session was filmed Zhipeng’s great talk is available to view from our GigaTV youtube channel.

The GigaScience team wishes you all a happy holiday season, and we hope Santa brings us all many more interesting genomes to come.